Now CEO of the Jabbar Group of internet-focused companies, Samih Toukan made his name as one half of the Maktoob story. He hopes that his success will be contagious across the Middle East. 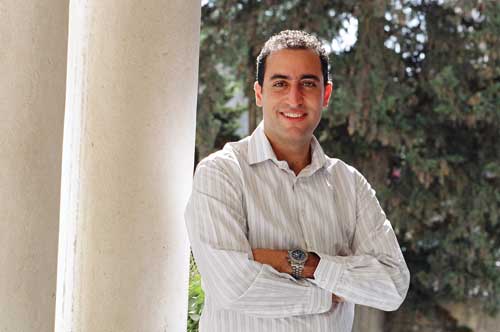 This article first appeared in the Summer 2010 issue of The Explorer, Aramex's thought-leadership magazine that investigates issues critical to businesses, communities and the planet.

It is, without question, the most high-profile entrepreneurial success story in the Middle East in recent years. When Yahoo acquired Maktoob, the Arab-language news and entertainment portal in August 2009, it catapulted the Middle East’s entrepreneurial landscape to the forefront of global business news. Internationally, it underlined the power and possibilities of online communication within in the Arab World, while Samih Toukan and Hussam Khoury, the men behind the venture, provided ample evidence that regional success could be found well away from oil wells and skyscrapers.

For Samih Toukan, the entrepreneurial journey didn’t end with the acquisition. He remains head of Jabbar Group, looking after the companies – iKoo, CashU and Souq.com among them – that Yahoo didn’t purchase. The drive to innovate, to confront challenges and create opportunities for others is, he insists, the real benchmark of an entrepreneur’s success.

What does the word “entrepreneur” mean to you?

Samih Toukan: There are obviously many definitions, but for me it is someone who is a risk taker, someone who displays the courage to put their plans into action. A lot of people have ideas, say they want to start this venture or open that business, but very few people actually do anything about it. So, for me an entrepreneur is someone who faces that risk, that uncertainty, and perhaps a lot of negative pressure from family and society, and still takes the leap.

Is there an element of the maverick required, too? Someone who rebels against the traditional corporate environment?

ST: In my case, definitely! I was working with Andersen Consulting and I realised after a couple of years that I wanted to do something on my own – and saw the internet as an area with a lot of opportunity. That’s not to say that people in corporate environments can’t be entrepreneurs, it’s not an either-or situation, but ultimately entrepreneurship is about going out on your own.

What is the state of entrepreneurship in the Middle East right now?

ST: We have a strong entrepreneurial culture here, with a long history of traders and families who have started enterprises, so I don’t think we lack entrepreneurs. I think the emphasis now is on the need to create more successful companies and diversify our economies. In Jordan, for instance, we have no real venture capitalists, no mentorship programmes, poor access to credit and government regulations that do little to support new ventures. We have the right spirit, we just need to do more to capture, nurture and support it. That also applies to the need to accept to failure; every entrepreneur will face it and will have to deal with it. But with hard work and proper execution, they will overcome it and eventually succeed.

We hear a lot about “embracing failure”. Shouldn’t we actually help create an ecosystem that supports entrepreneurs so that they don’t fail?

ST: Well, that would be ideal. But the main point about failure is the shame associated with it in our societies, resulting in a complete aversion to risk and a reduction in innovation. There’s also the need to fail in order to learn. That doesn’t necessarily mean an entire business will fail and everything is lost, it just means that certain products don’t work, or some ideas won’t get off the ground. Investors tend to invest in the people more than the product itself, so failures are anticipated along the journey to success.

Is there also a misunderstanding that entrepreneurs are always inventors, that you can only be an entrepreneur if you have created something new?

ST: Absolutely. It’s incredible how many times I heard people say in relation to Maktoob, “Well, it’s not as if you invented anything.” They complained that I didn’t come up with Facebook! But entrepreneurship is about creating a business, creating jobs, and creating opportunities – it doesn’t necessarily mean creating a completely new product. If so, there’d only be one car company or one airline. The challenge for us to is to adapt the existing ideas and make them relevant to the Middle East.

You launched Maktoob with Hussam Khoury. How important is it for an entrepreneur to not go it alone? Who else did you look to for advice?

ST: It was fantastic to have a partner like Hussam – and we’re a good team. I’m the aggressive risk taker who always wants to leap into things, while he is the one who calms me down, thinks more coolly – the wise one, if you like. When it comes to the internet, that is a really good combination.

Now that you have moved on from Maktoob, a general web portal, you are involved with a range of other companies that offer more defined internet services. Is that a lesson learned from the earlier business – that you need to specialize in order to find room in the market?

ST: At the Jabbar Group, we are focusing on advertising, which is a massive part of the internet, and e-commerce – a big growth area in the Middle East. Through Souq.com and CashU we are building better models in online payments and the logistics of delivery, and we’re using Aramex’s expertise to facilitate this. But there’s also the problem of having to deal with 22 countries. Each one has its own laws, regulations, taxes and so forth, and building mass across them takes time.

Working in the internet industry, how much ongoing entrepreneurship does there have to be to keep pace with ongoing developments?

ST: In the internet industry it’s vital. Consumer habits change rapidly in e-commerce – for instance, people seem to have moved away from auctions to more of a straight purchase system. So, companies that are successful today aren’t guaranteed to be successful tomorrow and they need to keep innovating to stay ahead of the competition. The internet industry is very difficult to predict.

You are a prominent user of, and believer in, social media. Is this an important new tool in an entrepreneur’s armoury?

ST: I think it is vital for all businesses. It is a new way to share knowledge very quickly, it is bypassing existing sources of information and it can can empower more and more people. Three months ago, CashU still didn’t have a Twitter account, and now we already have 900 followers, with whom we share competitions, promotions, and advice and tips on e-commerce.

After the Maktoob deal, you could have quite easily spent the next 20 years relaxing on a beach in Aqaba. What keeps you going with the new ventures?

ST: Almost as soon as the deal with Yahoo was done, I understood that being an entrepreneur actually isn’t about money at all! The day before it was, definitely, but the day after I realised I still had the same hunger. I didn’t take a holiday, I simply focused on the other businesses and we are working harder than ever to develop more success stories. Entrepreneurship for me now is about helping the CEOs in the Jabbar Group’s eight companies to achieve their potential. I don’t want one Maktoob every five years, we want five a year. Success is contagious!

This article first appeared in the Summer 2010 issue of The Explorer, Aramex's thought-leadership magazine that investigates issues critical to businesses, communities and the planet.