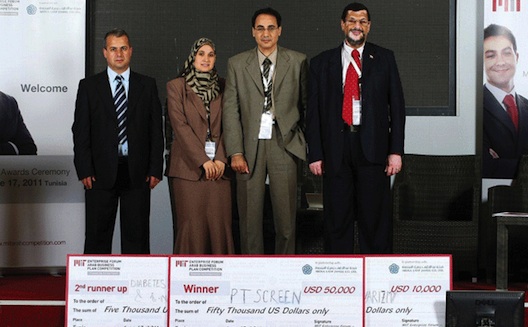 This Thursday, the MIT Enterprise Forum is launching the 5th round of its yearly Arab Business Plan Competition, at the Radisson Blu Hotel on Abu Dhabi’s Yas Island.

The kickoff of the 5th Competition in Abu Dhabi will feature a panel discussing the current situation of entrepreneurship in the Arab world, a panel showcasing the experiences of previous winners, and lastly a panel assessing the capabilities of Arab entrepreneurs and examining what’s lacking- see the full details on the Facebook page and RSVP to info@mitarabcompetition.com today to grab a spot.

We sat down with Hala Fadel, Chair of the MIT Enterprise Forum of the Pan-Arab region, to discuss how this year’s competition will differ from last years, and what it really takes to win.

Three of the top four were in the high-tech, software, and communications industry- do you expect the trend to continue?  What are the sectors from which you see the most applicants?

High-tech and telecom sectors have always accounted for a good 40% of applications. It just so happens that 3 among the 4 winners last year were in that industry, but it's not only the case. The year before it was an educational company that won, and the runner-up was also in education. Generally the sectors that we tend to see are, in a sense, the sectors that represent the future of our economy. Green technology & sustainable energy have also been big among the applicants, as well as healthcare.

What kind of sectors do you expect to see more of this year?

The green sector. It’s been growing for the past 3 years. If you look at the nine finalists that were present in Tunis, not just the winners, many are green companies, for instance, Bit Bait in Algeria, which creates a fertilizer from natural substances. The green sector accounted for only 5-6% of applicants four years ago, but now we're up to 20% of applicants. I expect the numbers to increase.

In which sectors are you seeing less applicants lately?

One that is dropping is e-commerce. As barriers to entry in that field are becoming more difficult, we’ve seen less applicants.

What’s the breakdown, in terms of region? Are you seeing a rise of Egyptian and Tunisian entrepreneurs after the revolutions?

The breakdown between countries has been quite consistent. Our biggest source of applicants is Egypt, which typically accounts for 40%, and then Jordan, Lebanon, and the UAE each provide around 10% of applicants. Last year, however, we saw over 50% of our applicants coming from Egypt- there was a lot of energy there. about feeling free and wanting to start a business. I have really high hopes for Egypt.

Morocco, Algeria, and Tunisia also collectively account for around 10% of applications. This year we’ve taken a few steps to make North Africa more involved, including having the final in Tunis, and now allowing for applications in French.

All of the finalists seem like a good bet. What really sets the winners apart?

The common denominator among the winners is not that they come from a specific sector- rather, they truly have a passion for their business. We have a very rational ratings scheme that the judges follow to rank each business. But by the end of our competition, often the companies have prepared so well that their grades are not very far apart. The one or two grades that make the difference are due to passion. If a company presents their idea with passion and conviction, and you see that they have the energy to drive this business to a full-fledged execution in real life, and that is what makes them a winner.