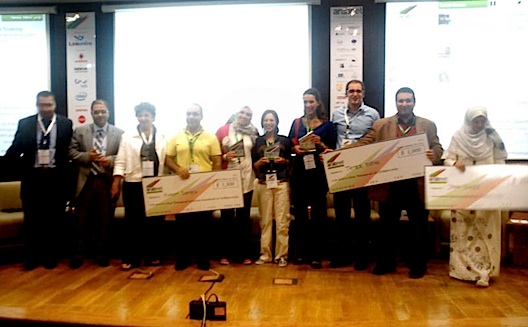 Cairo played host to its first ArabNet conference for internet and mobile entrepreneurs on the 19th & 20th October.  “We’re glad to finally come to Cairo,” said Arabnet CEO and founder Omar Christidis. “Egypt is the biggest market in the region. We had to come; tech businesses in the region really should include Egypt in their plans.  We’ve tailored our content to the local environment, but as much as our content is important, the chance to network at our events is a critical feature,” he continued.

The chance to network was a priority for most attendees, as typified by blogger Waleed Nassar who said, “I’m interested in the use of technology for social change, so I’m here primarily to network for my blog wilyawil.”  The crowd of networkers ranged from geeks to suits, including many students and boasting an abundance of developers.  Sarah Abu Nar, from app developer Ketaaby, added, “the networking opportunities here are awesome, so is the chance to get exposure of course.  I hope to learn new viewpoints from the panels, and get new ideas on collaboration.”

Of the presentation and panels and the first day, the audience reacted best to “Egypt 1.0”.  The panel featured the founders of some of Egypt’s first web services, namely Wael Amin of ITWorx, Tarek Ali Taha of e-Dar, Tarek Amin of Career Egypt, Ayman Rashid of Otlob, and Abd El-Rahman Mehilba of Mazika. All achieved great highs as first-movers in the market, and then faltered, some much more than others. Indeed, Tarek Amin went to sleep one night worth nearly twenty million pounds, yet was in debt the next day because promised investment had been withheld.  They all shared a distrust of VCs, but difficult experiences made them stronger and taught them the value of money.  It was an informative and humorous talk, as the founders knew each other well and had collaborated a great deal, so much so that all, except ITWorx, had decided to sell to LinkDotNet in the same deal.

The other highlight that day was the announcement by Google of its Ibda2 competition that aimed at identifying, mentoring and rewarding internet and mobile startups in Egypt. The competition aims to mentor 200 idea-stage entrepreneurs over seven months, promising a first place award of US $200,000 with no limitations, conditions, or strings attached. Wael Fakharany explained that the initiative is the brain-child of Google’s Egypt contingent, and has been his near sole focus and passion for the past months.  While Wael is already well loved within Egypt’s digital community, this initiative will probably make his status legendary.

After the first day’s highs, it was perhaps understandable that the second day had a gentler feel as attendees mingled freely to get inspiration.  Ahmed Eid, an engineering student at Cairo University, said “It’s been great- I’ve been able to approach and talk to people with great experience in business, so I can get a feel for what I’ll do after graduation.”

The day saw panels on social media, marketing, advertising, gaming and the future of mobile app platforms in the region.  One highlight was an unreserved, politically flavored panel discussion entitled “Egypt 2.0,” which focused on the changes occurring in Egypt and the role of technology in bringing society towards a more equitable future.

The final talk of the evening was Khaled Ismail’s tale of his journey.  He described returning to Egypt after finishing a PhD at MIT, the lessons learnt from his first two start-ups failing, and his current engineering company SysDSoft, which owns over 20 patents and was recently acquired by Intel.  It was a fitting closing, as SysDSoft had stood out as a beacon of success due to perseverance in Egypt’s post-Tahrir environment. He topped off his talk with a madly inspiring call to action and a philosophical view of how to prosper in the internet “ocean.”  The crowd gave him an earnest standing ovation; anyone who had not heard of him will surely remember him now.

The event proper ended with the announcements of the winners of Arabnet’s now-famous competitions- the Ideathon and Startup Demo. Karim Sameh won the Ideathon for his cloud-based integrated development environment (IDE) concept CloudCenter. The hotly contested Startup Demo first prize went to SuperMama, a progressive regional mothering portal.  And to demonstrate the spirit of cooperation, SuperMama announced a strategic partnership with 3rd prize winner Zaytouneh, a Jordan based regional recipe-video site.  In fact the top three Startup Demo prizes went to startups founded by women, a clear indication of the social change sweeping the region.

Alas the social change hasn’t touched some areas yet.  “How can I put this diplomatically…” mused Christidis. “Let’s just say it’s been extremely difficult navigating a politically unstable and rapidly changing environment.  But overall it’s gone well and it’s been more intimate than Beirut. I feel we’ve strengthened the digital entrepreneurial eco-system,” he concluded. And as Egypt plays catch-up with other smaller countries in the region, a strong support system is exactly what it needs.