Over 450 students and professionals attended the closing day of the 5th annual Harvard Arab Weekend on Sunday November 13th, which consisted of a series of panels and keynote addresses taking place at the Harvard Business School campus in Boston. The Weekend, having hosted leading political figures, Nobel Prize laureates and activists in the fields of education, public health and science, took a professional spin on Sunday, providing a platform for dialogue between the region’s top executives and students from leading universities in the United States.

“Uncertainty in the region can only go down. There are a multitude of opportunities to invest in growth and reform”. Mr. Arif Naqvi, CEO of Abraaj Capital, a leading private equity firm in the MENA region, opened the day with a keynote speech addressing the prospects of doing business in the region. He shared his positive outlook and urged the private sector to invest in the region to help meet the “unfunded capital needs reach[ing] $140 billion”. 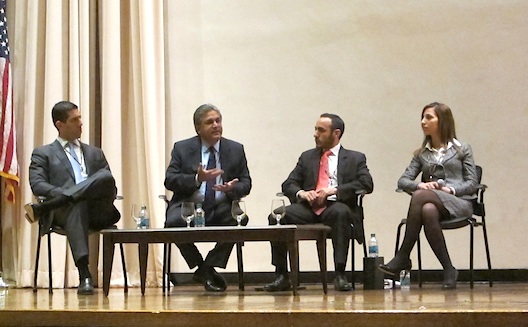 The day continued with a series of back-to-back panels discussing the most recent business topics across 6 panels: Finance, Energy, Media, Women, Management and Entrepreneurship. The high caliber of speakers, combined with an engaged audience, led to heated debates and diverging opinions. Samir Hanna, CEO of Bank Audi, was one of the panelists discussing the role of financial institutions in fueling corporate growth.  Executives from across the energy value chain, from Schlumberger to Future Energy Corporation, raised concerns regarding the impact of political change on energy markets.

The discussions then transitioned into the media panel, which joined executives from Al Jazeera, Google and Facebook, as they discussed the role of online media to promote transparency and accountability – not only to ignite reform. “The Arab Spring has enhanced Al Jazeera’s credibility and increased its viewership by over 250%,” says Moeed Ahmad, Al Jazeera’s Head of New Media.

In a parallel room, leading female executives from the region discussed the challenges faced by professional women in the region and shared their success stories of how they were breaking the cement ceiling. “When women thrive, the entire society benefits”, said Reem Badran, Member of Jordanian Parliament and CEO of Kuwaiti Jordanian Holding Company, while Raghida Dergham, Columnist and Senior Diplomatic Correspondent for the London-based Al Hayat, asked investors to setup a MENA fund to empower women in the region. 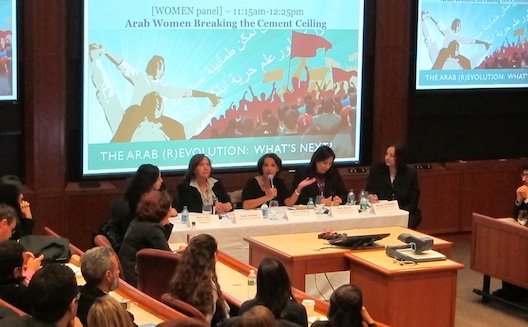 The debate extended into a networking lunch between attendees and speakers as they exchanged opinions (and business cards). In the early hours of the afternoon, conference participants congregated into the last two panels of the day. In the Management panel, executives from the region’s top firms discussed how they were managing their organizations amidst the turbulence. “None of the business plans we put together in the last 12 years went as predicted,” declared Ghassan Hasbani, CEO of STC International. However, the entrepreneurs in the adjacent room were more optimistic. In a discussion led by Habib Haddad, CEO of Wamda, regional investors and entrepreneurs debated what it would take to see a burgeoning wave of entrepreneurs launch creative and innovative ventures.

By 3:20 pm, everyone was eagerly anticipating the long-awaited closing keynote by Carlos Ghosn, Chairman and CEO of Renault-Nissan. And it was worth the wait. Mr. Ghosn delivered a truly inspirational speech in which he discussed the importance of diversity in the workplace. “What helped me a lot was that I was not a typical Lebanese, American, French or Brazilian guy. I was diverse, and I could break all taboos”, as he described one of the success factors behind his epic turnaround of Nissan in the late 1990’s. He then continued to share his top 3 leadership lessons: “First, assess and understand the crisis, then establish a focused vision of where you want to go and, finally, motivate the people around you.” The weekend ended to a standing ovation. 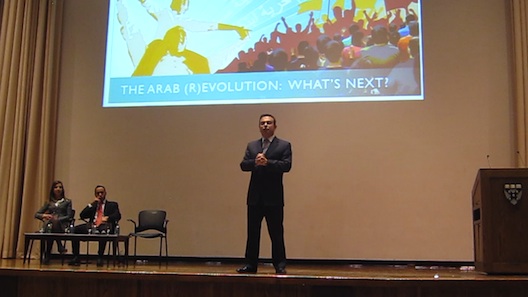 The HBS 2011 MENA Conference was organized by co-chairs George Audi and Dalia Tarabay, both Lebanese students in their 2nd year at the Harvard Business School. “The winds of change may be blowing too strongly for some businesses, making it more challenging for them to operate in turbulent times. For others, these same winds are unraveling a plethora of opportunities”, said George in his opening speech. Dalia continued, urging conference participants to leave with a determination to make a change, stating “It is up to us, future and current business leaders, to draft “what’s next.””

One can only hope that these words will resound beyond Harvard’s red foliage.