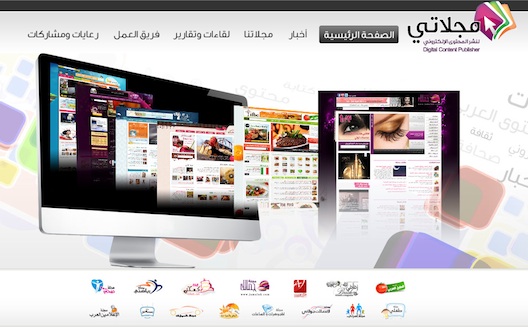 N2V has stepped up its support for online Arabic content for women, announcing investment in Mjalati, a site that creates online magazine-networks for women, lifestyle, and business.

And while Mjalati’s first online publication is termed a "beauty" magazine, its goal to empower women goes far beyond glorifying attractiveness, says Masoud. "Our major strength is that we don't simply focus on physical beauty; we demonstrate the beauty of the mind, telling success stories of women forming businesses, being creative, and working in government."

Beyond catering to women, Mjalati is planning two other basic online content channels: a lifestyle series, that will include cooking, home decoration, and health, and a third online channel covering business, finance, and economy.

Masoud plans to enter into content partnerships with channels seeking quality Arabic content, and plans to digitize Arabic books as well; as we spoke, he was at a book fair convincing publishers that digitizing content goes far beyond creating pdfs.

His vision may be ambitious, but Masoud has been crafting it for seven years. He launched the startup this year while working as a Business Development Manager at N2V, a role from which he has since stepped down. Yet he has been dreaming of building a large-scale online content portal for the Arab World ever since he launched an online bridal magazine in 2004.

The magazine, named "Zafafi," meaning “my wedding,” succeeded at the time, but "I was a one-man show,” says Masoud. “I was the designer, content developer, and marketer, and I was funding it out of my own pocket. I reached my maximum, and realized I couldn't scale without funding."

He chose N2V as an investor because he wanted more than cash, he says; he wanted to leverage the slew of experts he had come to know while working there. With the launch of idea-stage incubator N2V Labs and a seed-stage training vehicle, the holding company has transformed itself over the past year into more than simply a funding source. With N2V's advice, Masoud hopes to build Mjalati into “a key player in the Arabic content industry” in three years.

Masoud's experience at N2V also made him realize that he’s an entrepreneur at heart. "After I succeeded in establishing good companies at N2V over a year and a half, I realized it was time to create my own project again," he says. "It's a big risk to step down from an executive management position, so there's been a lot of pressure, but online content is my passion and I’m happier doing this."