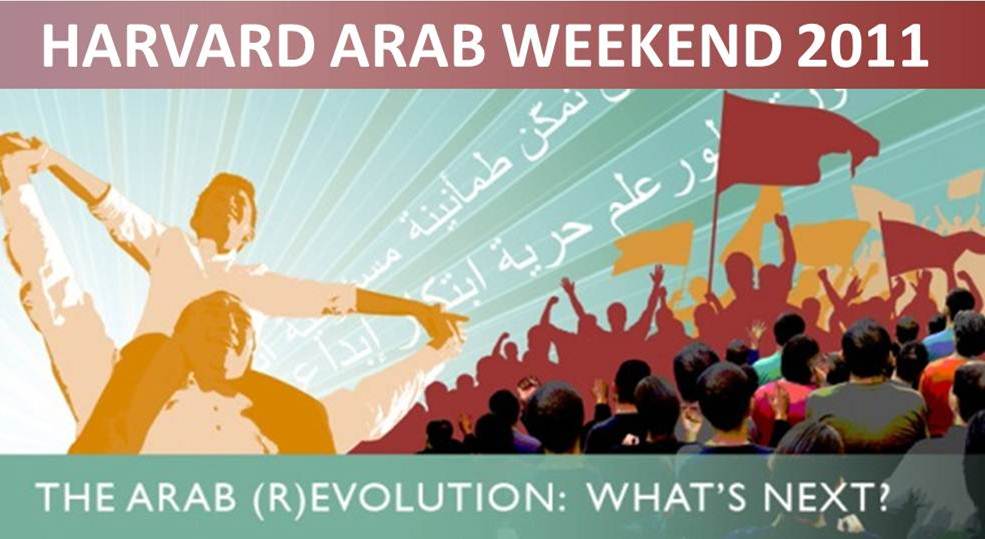 The Arab World’s overdue awakening is now irreversible and unstoppable. This was the feeling that dominated the 5th Harvard Arab Weekend (HAW), which took place this weekend across Harvard University. Under the theme Arab (R)evolution: What’s Next?, the weekend brought together more than 600 participants in what is the largest pan-Arab conference in North America. In place of the usual royals and government figures, this year’s conference showcased opposition figures, rebel leaders, and young activists – in whose hands lies the future of the region.

Keynote speakers and panelists projected various levels of optimism with regards to the short- and long-term stability of the region, but agreed on one thing: the Arab World’s hope lies in its fearless and innovative youth, including those in the diaspora.

Nobel Peace Prize Laureate Tawakkol Karman’s speech, delivered in pristine Arabic, was the most inspiring of all. “I have come to the free world to remind the international community that they need to live up to the ethos that they have hailed in Tunis and Egypt [by supporting the Yemeni revolution],” she said. Her two requests – freezing Ali Saleh’s assets, and sending him to trial at the International Criminal Court in the Hague – received some traction among the US and French delegations at the UN. She reminded the Arab diaspora and the Harvard community of their moral responsibility towards the fate of Yemen, and persuaded the audience to chant the slogans of the Yemeni revolution with her.

One of the most touching moments of the conference was the reunion of Karman and Esraa Abdel Fattah, co-founder of the April 6 movement and one of the Egyptian activists nominated for the Nobel Peace Prize. Abdel Fattah told Karman to keep fighting, urging “the victory is near, prepare for governing after the revolution.”

The conference started on Thursday with a keynote address by Mahmoud Jibril, who had stepped down just days earlier as Libya’s interim Prime Minister. Amr Moussa, the former secretary general of the Arab League, was in the audience. Jibril, wary of a power vacuum, highlighted the challenges of building a state and a democracy (which comes first?), and the precariousness of the Libyan situation, given the critical gap between the official legitimacy of the Transitional Council, and the popular legitimacy of the armed groups on the ground. He hailed the youth of Libya who, with “more guts than their elders,” toppled the status quo.

Amr Moussa then opened Friday’s session with a speech that had the undertones of a presidential address. He stressed education, healthcare, democracy and reform as keys to the future of Egypt.

Marwan Muasher, the former Deputy Prime Minister of Jordan and current Senior Vice President for External Affairs at the World Bank, however, was cautiously optimistic, dividing the Arab world between “those states that have time [read: oil], and those who have run out of time” [to reform]. He called for the youth to engage in politics.

The need for youth to engage through political channels in the democratic process was also highlighted during a panel dedicated to the new generation of Arab activists. Rami Nakhle (who used the alias Malath Aumran) from Syria; Ahmed Maher, the founder of the April 6th movement of Egypt; and Marwan Maalouf, a human rights activist from Lebanon, spoke of their struggle to bring about change as anti-establishment activists. Maalouf stressed that the only way for youth to influence policy is to get off their twitter accounts, organize, and take part in politics.

Another panel explored the tension between democracy and ethnic national identity – a subject seldom discussed in the region, yet one that significantly and continuously shapes the roadmap ahead. Harvard professor Ishac Diwan stressed the importance of addressing collective wounds within a nation’s psyche, in order to reconstruct a cohesive society after turbulence. As Bassam Haddad said, Arabs cannot credibly continue to wave an accusatory finger at Israel for its treatment of Arab citizens, while repressing the Kurds in Syria and elsewhere. Member of the Knesset Jamal Zahalka echoed the statement with a plea for more rights for Palestinians in Lebanon.

The conference was also generally a display of youth activism. Egyptian students from across the country came together to raise awareness on the military trials of civilians, and obtained from Amr Moussa a public condemnation of the practice that is now facing some 1,200 civilians, including activist blogger Alaa Abd El-Fattah.

Later that day, Ahmed Maher and Esraa Abdel Fattah, two founders of the April 6th movement that helped topple the Egyptian dictator Mubarak, went to Harvard Yard to show support for the student movement “Occupy Harvard” that is advocating “a university for the 99%.”

Other panels that weekend covered issues of socioeconomic development, education, health, and scientific discovery. A full day was dedicated to business in the new Arab World.

In short, this weekend was a message of hope, and a reminder of all the work that remains to be achieved.