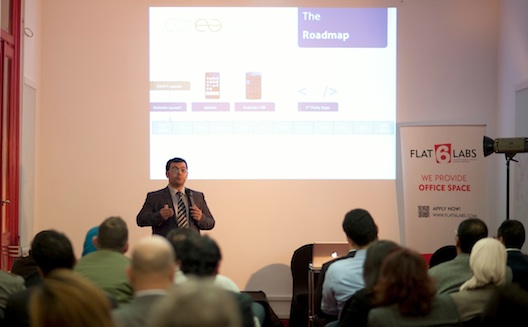 Egypt’s newest seed stage accelerator, Flat6Labs, has graduated its first group of startups, culminating in a Demo Day at their Cairo center on Sunday.

After three months of mentorship and training that included seed investment of $8-10,000 for an equity stake of 10-15%, the five cycle 0 startups showcased their work to over 40 potential investors and Flat6Lab’s mentors.

All of the startups were tech related, as Flat6Labs focuses exclusively on the IT sector. and yet each addressed a different issue in Egyptian society. Ekshef in particular aimed to enhance efficiency at local hospitals, by helping patients find and book doctor appointments online or on their mobile device.

Careerise aimed to address the press needs for better recruitment in Egyptian society, by leveraging social networks. “Most job recruitment in Egypt happens through personal referrals,” explained Flat6Labs CEO Ramez Mohamed. “Careerise leverages a user’s Twitter or Facebook account to showcase the knowledge bases of people you know.” This makes the service not unlike Facebook-based job relevance platform Identified, although Careerise focuses more on adding online networks to offline information and less on quantifying one’s relevance to a job position.

While these two have a local focus, Careerise has plans to expand to the Gulf. Fitting with its goal of accelerating scalable ideas, Flat6Labs encourages all of its startups to scale regionally at the very least, if not globally, says Mohamed.

The other three apps focus on online platforms that were global products from day one. Snapze helps users find the best way to spend their time, and F16Apps’s product Neatly is mobile application that rearranges one’s Twitter timeline according to interests rather than chronology. Last but not least, Tabshora, which debuted at Startup Weekend Cairo last year, helps creative community members communicate easily with their clients and peers.

What’s next for the startups now that they are officially out the door is the obvious step of garnering funding. While Flat6Labs has helped the startups develop their business plans, prototypes, and management skills over these three months, it doesn’t want to be too hands on at this stage, says Mohamed. “We are on the board of each company, so we will certainly help them, but we want to give them the space to work on their own,” he insists.

And it’s not just the startups that are making their way. Flat6Labs itself, which was started by Egyptian venture capital firm Sawari Ventures, in conjunction with the American Uinversity of Cairo (AUC) School of Business Entrepreneurship & Innovation Program (EIP), is learning as well and iterating its model following cycle 0. Ahmed Alfi, Chairman of Sawari Ventures, and Ayman Ismail, Abdul Latif Jameel Endowed Chair of Entrepreneurship in Entrepreneurship at AUC play a guiding role.

“We are enhancing and modifying our structure based on our findings from this cycle,” says Mohamed. “We’re planning to focus the training towards the beginning of the cycle rather than having it continue throughout the process. We’re also looking to bring in more established entrepreneurs as mentors and speakers.”

A final goal, he says, is building more cohesion in the angel investment space. Hopefully this will speak to a complaint voiced by some startups throughout the Middle East and North Africa- the ecosystem is fragmented, where cohesion could offer more consistency in terms and expectations.