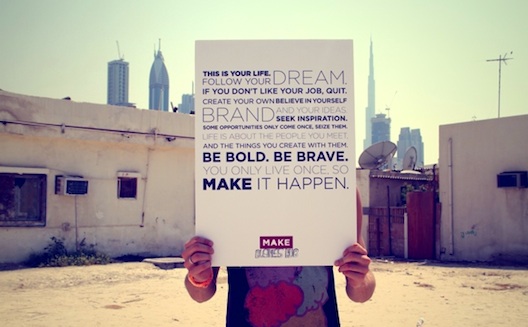 Leith Mathews came to Dubai in 2007 to work in the emirate’s booming food & beverage industry. Having a genuine passion for the industry, and having always dreamt of opening his own independent restaurant and café, Mathews spent a lot of time after his day job at cafés and other makeshift workspaces thinking of different concepts for his own food place.

After several months of working from coffee shops, Mathews began realizing he wasn’t the only one. “It started becoming more and more obvious that these places were becoming mini offices,” he says. “There seemed to be a need for a physical space where these people could work. I quickly put out the restaurant-only ideas and started thinking more about the idea of a mobile workspace.”

In December 2010, the itch to enact his vision took over; Mathews quit his fulltime job and set out to create the ideal mobile workspace in Dubai. Yet, as Omar Christidis of ArabNet discussed earlier this week, the startup process in Dubai proves to be a Catch-22: '“expatriates cannot live in the UAE without a visa, and cannot get a visa without having a job." As Mathews discovered, it’s not exactly the ideal place to start up if you are a twenty-something entrepreneur hoping to establish a new food & beverage concept.

In addition to visa challenges, it was also difficult to get government entities to approve a business idea when the concept cannot be “checked off a list,” says Mathews. It was also difficult to rent space as an independent food and beverage business. Several major vendors would not allow him to set up shop at their location unless he could show proof of profits of other branches locally, or at a minimum, internationally.

Yet with perseverance, Mathews succeeded in overcoming these challenges, securing investment for his idea and launching the MAKE business hub last week on Monday February 13th. Perhaps the most eye-catching aspect of MAKE is the level of detail and attention that went into designing the space. Unlike the standard coffeeshops where entrepreneurs and creatives typically work, MAKE has customized its entire design, from the furniture to the food, around the concept of the “mobile worker.” It includes “pitching” booths that entrepreneurs can reserve in order to have meetings and a chalkboard dedicated to group brainstorming sessions.

By establishing MAKE, Mathews believes he has tapped into a real opportunity in Dubai, where there is a genuine desire for authentic and independent places that are far away from Dubai’s regular commercial and franchise restaurants. Mathews believes this presents an opportunity both for him and his potential clients as the space for the “independent” worker in Dubai grows.

For those considering starting their own thing in Dubai, Mathews has two pieces of advice. First, there is a “wealth of creative people in Dubai. If you can tap into their skills and abilities, you can get a lot done on a very lean budget.” Second, and more importantly, he says, “don’t overplan.” It’s important to plan for the future and take calculated risks, but he says, “don’t let a business plan be what gets between you and doing what you want to do in life.”

It’s too early to predict whether MAKE will be a success or not, but places like MAKE can go a long way to create and drive a culture of entrepreneurship and creativity in Dubai. Yet Mathews’s experience highlights the broader question: how many independent workers will need a second fulltime job in order to be entrepreneurs in Dubai? In Mathews’s words, “it’s difficult but not impossible."