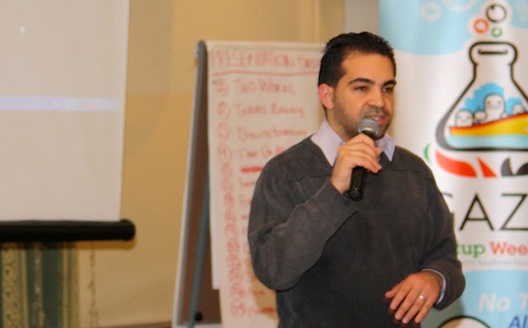 Winning the third place in Startup Weekend Gaza this past December, AnaLancer has launched an “expert-sourcing platform” that connects freelancers from MENA with business owners worldwide.

Launching in Gaza, the platform aims to draw clients from outside its borders. “AnaLancer is an online outsourcing marketplace,” explains founder Amir Shurrab. Building trust is central part of its mandate, he says. “As business owners commission work from freelancers remotely, we assure that they deal with professional freelancers.”

While other job search sites in the region such as Bayt, Akhtaboot and Gradberry offer freelancer listings, and other sites like Outsource to Palestine offer outsourcing services, the goal of AnaLancer is to create a unique, Arabic freelancer community, says Shurrab. “AnaLancer is not just an Arabic copy of international outsourcing websites, it’s an Arabic alternative working community.”

After working for many years with outsourcing websites, he felt that “the MENA region has a serious need for an outsourcing platform that retains Arabic culture.” He launched AnaLancer with both an English and Arabic interface to reach a wider segment of Arab freelancers.

It’s not a new idea in the region- as the World Bank urges the need for job creation in the Arab World over the next decade, freelancing has become one clear solution for generating part-time and project-related jobs. Sites tasmeemME and designHub work to link freelancers in the creative sphere with those looking for in-region design work. Qordoba, on the other hand, has launched a platform that freelancer translators can easily join to pick up part-time work. Yet the region has yet to see a sector-agnostic freelance platform in both English and Arabic.

To build AnaLancer, which is still in its initial stages, Shurrab gathered with six team members at Startup Weekend Gaza to formulate a business plan and workflow. In 2.5 days they were able to finalize their revenue model, which is based upon taking a commission on every transaction completed through the platform. Their hard work, solid model, and convincing presentation guaranteed them the third place at the end of Startup Weekend, leading them to get support from Mercy Corps’ Arab Developer Network Initiative (ADNI) program.

As competitors in the space continue to grow and come online, AnaLancer plans to differentiate itself by focusing on building a database of experts and focusing on quality. “We plan to be a trusted platform that examines the skills of freelancers before they can bid on tasks,” says Shurrab. It’s also focusing on providing various payment options, including PayPal, and payment via MasterCard andVisa, with future plans to allow freelancers to be paid through check, bank transfer, or PayPal.

The team aims to establish their customer base by initially marketing on Facebook and Google Adwords. Shurrab adds that he aims to expand regionally by franchising throughout the region and building partnerships with universities and youth groups. “The total MENA region is expected to witness a compound annual growth rate of 8% between 2009 and 2016,” he says. “Based on this, we expect to have annual growth of 70% in our second year, 100% in the third year and 200% during out the fourth year.”

Like many entrepreneurs who work within the difficult situation in Gaza to get their startups running and evolving, Amir and his team are working hard to launch the website in the coming months, despite the issues they will face regionally and locally. “Outsourcing culture is not widespread in MENA,” Shurrab admits. But he’s hoping that this sector will grow in the coming few years and that this will help him gain market share.

Working from Gaza can also be a huge obstacle when it comes to financial transactions. “The political climate affects the money transfer process; recently Western Union suspended services in Gaza,” he explains.

Yet the team plans to persevere. Shurrab especially thanks his wife for her support of him as a Gazan entrepreneur. “I want to take this opportunity to introduce a word of thanks for my wife who helped me with the technical aspects and has always cared about me.”