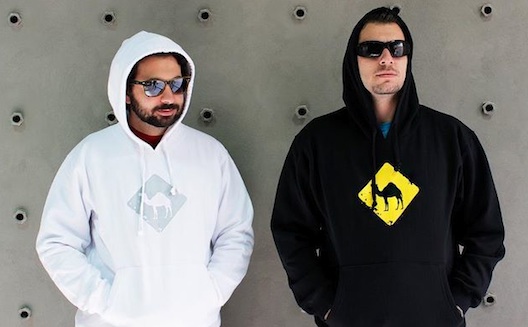 As the warm weather slowly returns, look out for what has become a seemingly ubiquitous feature of West Amman fashion: the Jo Bedu t-shirt. Begun as a startup idea designed by two childhood friends, the concept has evolved into a three-pronged business that is bringing together some of the young creative minds of Jordan to collaborate on various projects, with an ever-increasing reach.

Tamer Al Masri and Michael Makdah established their business in 2007, starting with something they loved – t-shirts! They used Arabic slogans and Arab pop culture to develop unique designs.

“We were looking for an idea that includes marketing – which is my passion - and art, which is Tamer’s passion. We brainstormed and came up with the idea of creating t-shirts,” explained Michael.

Simple enough. Everyone wears t-shirts. Everyone likes a bit of pop culture.

They started off with an initial investment of JD3000 between the two of them, developed six designs, produced 600 t-shirts and got a stall at the weekly Souq Jara market.

“We were completely ignored for the first month while we were waiting for our t-shirts to arrive and selling bandanas instead. We got excited when we made 5JDs one day,” recalls Tamer.

But when the t-shirts did arrive, Tamer and Michael’s stall created a bottleneck within the market, as amused visitors stopped to see what was going on, and the smiles and the laughs drew others in.

The first batch of t-shirts quickly sold out and the revenue was re-invested. They produced 4,000 t-shirts, sold them and then doubled their production, and so on. They added new designs, solicited support and help from family and friends, had a lot of late nights and worked all of their Fridays. Friends were recruited to paint the new shop in exchange for pizza, and family members were kept up helping to package and box. Michael and Tamer also handled their fair share of challenges along the way.

“We dealt with everything, from the skyrocketing price of cotton, to unreliable suppliers, high taxes, and being undercapitalized,” said Tamer. “We still deal with challenges every day.”

Despite this, their t-shirts became increasingly popular. And new products were added. In the Jo Bedu shop in Jabal Weibdeh, which opened in April 2009,you’ll find a colourful range of t-shirts, along with many other lines that have been added, including hoodies, children’s t-shirts, iPad and laptop cases, pillows, and more, all stamped with a little bit of Arab pop culture. While the t-shirts have become very popular simply through word of mouth, and Tamer and Michael built on the buzz through PR events, such as mansaf-eating competitions, and social media.

According to Michael, “Social media played a big part in our marketing and communications, from the start. Our Facebook group is older than our brand! It also helped us collect marketing information, and even recruit some of our designers.”

Today there are 84 designs for Jo Bedu t-shirts and other products, and the company employs 10 people. Items are flying off of their colorful ceiling-to-floor shelves, and visitors have waited outside their store even before it opened.

“We are just trying to keep up with demand,” confesses Tamer.

To keep the creativity going, the pair set up Warsheh as part of the Jo Bedu group. Warsheh is a creative studio that commissions designers to develop the concepts for Jo Bedu products. They are also planning to offer these services to third parties soon, providing image design for anything from NGOS to restaurants.

In addition, they are providing a space for other creatives to launch their ideas. Philadelphia Skateboards is the third entity to evolve from the Jo Bedu group, producing skateboards adorned with locally-developed designs.

“The Jo Bedu store is our flagship, where we want to be. And we want to reach all over the Arab world, wherever there is street culture and Arab art and design,” Michael exudes.

Their advice to other entrepreneurs? Again, it’s quite simple.

“Be original,” says Tamer. “There is no price to being original. Replication doesn’t work, we’ve seen if fail many times over the past five years amongst competitors.”

And for Michael, the key is, “Do something you believe in and enjoy. If you are doing it only for the money it won’t work.”