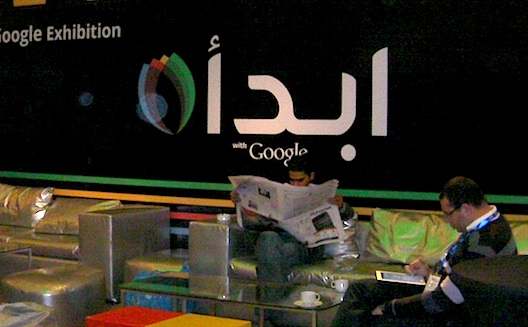 Ebda2, the Egyptian start-up competition otherwise known as “Start With Google” that began some months ago, reached the semi-final stage this past Tuesday, March 20th.  In an all-day exhibition, the 50 remaining competing start-ups showcased their product or prototype at independent stands. A panel of judges approached each stand individually to hear their pitches and grill their prospective business models.

The Fairmont Hotel venue was certainly plush, but the event itself was surprisingly subdued, although Google had created much media fanfare over the preceding months.  Except for a few media people, myself included, conducting interviews, the stands were bereft of an audience for long stretches of the day. With time on their hands, many of the contestants vented their frustrations with the competition off the record.

There were two common complaints: Some contestants had entered businesses that had not only been up and running for up to three years, but were also already turning a tidy profit.  This lack of level playing field could be seen in the stands; some had multiple big screen displays and lavish marketing material, while others were just one person with a laptop and an idea.

But the main complaint was that the huge prize money of US $200K would go to only one winner.  The consensus was that it would have been better to split this between three winners.  With three winners still receiving a large financial boost, the chances of one of them making it big would be much larger and, beyond that, the remaining competitors would feel they had a real chance of winning something.

On the record, everyone agreed that simply being part of a Google-branded competition brought experience and exposure unavailable anywhere else. “I’ve learnt so much from Wael (Fakharany),” said Mohamed Tarek of Cartoon Hero, an innovative product that will make children into super-hero e-versions of themselves. “Our business brain has grown considerably in the past few months, I’m confident we can reach our goal of fulfilling kids’ dreams,“ he added.

In fact there was a palpable sense of camaraderie between many of the contestants, even those in the same field.  Salem Korayem of Wasalny, the traffic congestion alert service, confirmed as much.“I get on really well with the guys from Bey2ollak, even though they’re direct competitors,” he said. “And I’ve been talking to Rawa7 about collaborating because their route finding service fits well with ours.”

Which 20 contestants will survive to the final is anybody’s guess.  There were many innovative products, and many with great profit potential (see the accompanying article listing the semi-finalists in detail).  The judges have to compare not only apples to oranges, but also apple seeds with fully grown orange trees, so it’s all subjective.  They might be tempted to even begin using semi-finalist Mawazeen’s product, a decision management system that promises to compare “dissimilar issues without reduction (in an apples-to-apples fashion).”

It would certainly be a rational decision, but where would the fun be in that? As any entrepreneur will tell you, starting a business and being in a competition like this is all about enjoying the ride.