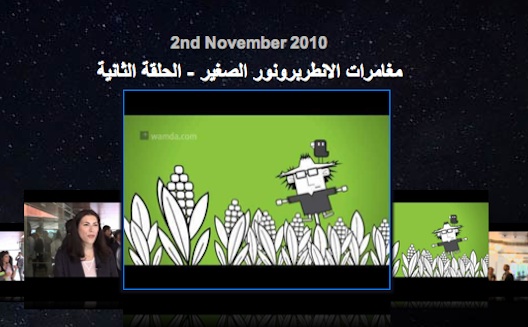 N2V has launched Lifeline, a new platform designed to showcase customized sets of media in a chronological format.

Those who head to the site, on N2V's social app platform Scoovery, will find a few examples of media types laid in an iPod Alubm-like format. You can flip through YouTube videos, photos, or articles, clicking on individual pieces to open, view or play them. If you pan through a visualized album-view on the top half of the screen, the bottom half simultaneously skims through a list of items by year, highlighting each in turn.

The idea, says creator Nagi Salloum, Chief Marketing Officer at N2V, is simply to create a platform that allows individuals and companies to showcase a set of content in an intuitive way.

"Lifeline isn't actually designed for a specific audience," he points out. "Whether you're an entrepreneur pitching to an investor, a graphic designer trying to display your portfolio, a company trying to reveal recent events, or a couple trying to tell the story of your  life together, Lifeline is designed to showcase your news."

While N2V has become somewhat of an idea factory, with the launch of N2V Labs, where startups launch quickly and then dissolve just as quickly if an idea fails to get traction, sometimes swiftly trading hands, the development of this particular idea was a very personal journey for Salloum.

"The inspiration for Lifeline came to me last June when my grandmother passed away," he says. "I wished there was a way to review her entire life somehow."

But in his nostalgia, Salloum also didn't limit his vision to recording the lives of loved ones. "I then began thinking more broadly about visualizing content and publishing it in an intuitive way, imagining how we could tell the story of N2V or display all of the articles from a given news outlet," he says.

This led to the creation of the WamdaTV lifeline, in fact. Because we have a wealth of videos that document entrepreneurial success stories over the past two years, Salloum thought it was an ideal test case (let us know what you think of the result).

Yet Lifeline is not just for media companies; any small business could potentially use it internally to categorize information chronologically. "At N2V, we also use it to plan meetings, or present projects to partners," he explains. The company is also using the app on its interface, replacing what was an "Events" header at the top of their site with a "Lifeline" of past and upcoming news.

While he meditated on the format and use for months, Salloum didn't begin building the product until this past December, once his star developer, Moskie, was free to pioneer the interface. "We wanted to make it very simple," says Salloum. "There's no menu and no logo on an individual page. We're trying to hide all of the navigation in the scroll bar, so it's more like an application than a website."

The team built the platform as it stands now in about two months, and now plan to add the critical features that will take Lifeline from a cool visualization tool to something truly business-friendly. Soon, Lifeline will have both social layer and a privacy layer, that will allow the platform to be shared on Facebook and Twitter, and also made private for internal use or sharing with a limited group.

As it stands now, the individual URLs of photos or videos uploaded can be shared independently, making the platform useful both as an aggregate browsing device and as a means of highlighting or sharing a particular piece of media. In the future, the entire platform will be also embeddable onto a blog or into a social media site.

So you could theoretically post your Lifeline on your Timeline. I asked Salloum if he was, in fact, inspired by Facebook's name for its new user profile interface, and he insisted no; in June 2011 when he first began searching for domains, Timeline was not on his mind.

Key strengths of the platform include its flexibility and the fact that N2V is not looking to compete with any other social media or media platforms for bandwidth with Lifeline; it will integrate with Facebook and Twitter, leverage YouTube, and eventually integrate with Vimeo, TwitVid, and photo platforms as well.

Using the app takes a little getting used to- clicking around the page or scrolling can catapult you to one side of the content list or the other, or cause pages to scroll by too quickly. It could also use some text formatting.

But these small issues are dwarfed by the platform's broad potential. If done right, Lifeline- which could perhaps use a more business-friendly name in the future- could become a great marketing platform for businesses, enabling them to showcase and disseminate information, or function as an internal organizing tool for cataloguing publications or employee portfolios.

Whether it becomes a largely personal tool or professional tool will depend on how N2V positions the platform, but even if a single diary can be recorded for posterity, its value is easily proven.