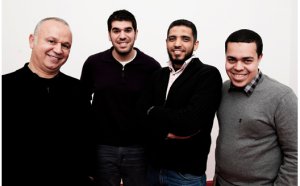 Nafham's founders were inspired by Egypt's national educational crisis. In Egypt, a class initially designed for 40 students now hosts 60 or 70 students. The educational system is overwhelmed by 1.1 million students yearly and cannot cater to specific needs for $100 in tuition per year- a meager fee compared to the around $8,000 a year on average that an American public university student now pays.

Over the past 5 years, this increase has been particularly pronounced, forcing an already straining educational system to absorb 2.2 million students. Added to that, Egyptian households might spend up to 17% of their budget on private tutoring as a supplement to formal learning.

All of the above has inspired Nafham, a free educational site that provides Egyptian students with their curriculum, in a manner desgined to foster understanding, broader application, and experimentation. You could call it a Khan Academy for Egypt; it also helps students follow-up with teachers through an interactive electronic environment, while allowing teachers and instructors to supplement their teaching by posting films or other creative media.

The site aims to instill in students a love for education and a deeper understanding of the learning process, while erasing crippling cultural obstacles to educational success that exist in some environments, such as the phenomenon of social ostracizing successful students. The hope is that an online platform can mitigate this effect and help students thrive and aspire to success.

The site also allows parents to follow up on their children’s progress through regular reports, and provides a social environment like that of Facebook, to attract students and increase their participation and commitment.

Nafham also reflects two truths that have become evident in today's digital culture in Egypt. The first is the evident importance of the internet in Egypt after the January 25 revolution; increased internet uptake and social media use has undeniably enhanced avenues for web platforms' potential success. The second truth is that the internet is now considered an essential learning tool in all successful educational systems, but this fact is not yet taken into consideration by the Egyptian educational system. Nafham aims to compensate for current shortcomings and support reform of the current educational system.

The Nafham team also hopes to work in coordination with governmental institutions in order to facilitate and overcome potential obstacles to the project.

A look at the Nafham team reveals their dedication to building the project, as some of them left previous career routes to start the project.

The educational system’s condition in Egypt kept tormenting successful entrepreneur and investor Ahmad El Alfi, the Founder and CEO of Sawari Ventures; he considered finding a solution for it one of his major duties and responsibilities. But he didn’t work on the idea until he met Hashem Ali at a gathering where he was consulting for Ali on a startup idea in the educational field.

Only then did the problem of the educational system resurface in Alfi’s mind, and he suggested to Ali that they join efforts to help improve one aspect of education in Egypt.

Hashem jumped into the project with Alfi. He had graduated in 2010 from the American University of Cairo, majoring in Economics, and had interned during his summer break at big companies such as Du Telecom.  Yet he turned down a promising career in telecom to join Nafham.

After working at digital marketing company Sarmady for 10 years, Mustafa Farhat was tempted to quit his job and start his own endeavor. He had reached administrative levels in creativity and design, but ultimately, entrepreneurship won over. He was always thinking about solutions for educating Egyptian students following an appropriate curriculum. At the end of a lecture he was delivering for Flat6Labs entrepreneurs one day, Alfi came up to him and suggested he joined Nafham. He accepted immediately and soon after resigned from his work.

Mohamed Habib also quit his work at Sarmady without an alternative plan but with the hope of building a startup, and this give him the opportunity to join Nafham’s team.

While the idea of a learning management system is not revolutionary, but neither was the idea of Facebook during the uprisings that led to Mubarak's deposition. Yet once a platform like Nafham is given to the crowd, it may just have the power to transform education in ways beyond what its founders have initially envisioned.