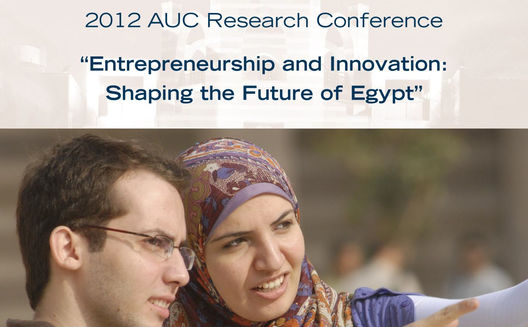 The 2012 AUC Research Conference, held this past week at the university's New Cairo campus, was an exercise in uniting Egypt's entrepreneurship ecosystem and creating productive dialogue about its challenges.

As students, local and international academics, and business convened at the event, titled “Entrepreneurship and Innovation: Shaping the Future of Egypt,” they avoided stagnant panels in favor of engaged debates on social entrepreneurship, the role of universities in green technology, education, innovation, the entrepreneurship ecosystem on the whole and various student projects.

The event, co-chaired by AUC Professors Nagla Rizk and Hassan Azzazy, presented the latest local and international research, news and views, in a series of 14 sessions spread over 3 days from April 17-19.  The research-focused sessions tended to be a bit dry and academic, but were nevertheless relevant.

For example, Rizk’s talk about the Egyptian economics of knowledge presented the audience with a practical look at how business models need to change for the knowledge-based sector.  Content providers can no longer rely on current monetization methods, especially for a growing internet generation that is used to a diet of seemingly endless free content. Take into account the local and regional problems enforcing copyright laws, and it becomes obvious the relying directly on copyright ownership for income is now unsustainable.

Some of the panel discussions provided the most energy and debate. In the discussion about the Egyptian entrepreneurial ecosystem, the cross-industry panelists talked about the challenges and future developments within the eco-system.  Ahmed Alfi, of Flat6Labs had spent the morning interviewing entrepreneurial prospects, and came to the realization that there needed to be some sort of psychological testing in place to determine the attitude of interviewees, as that was one of the most critical rubrics.

Ziad Mokhtar of Ideavelopers and Abdellatif Olama of Dare’n’Deal both agreed that attitude was the key factor in entrepreneurial success, regardless of how mature the ecosystem is.  Abdellatif spoke of the importance of a fighting spirit, and Ziad talked about the fundamental skill of efficiently testing a new idea.

When the panelists discussed where they thought investor money would go in the short-term, the venture capitalists (VCs) among them received a friendly rebuke from event co-chair Hassan Azzazy, who was now in the audience.  He was disappointed with VCs' admissions that they did not think they would be investing much in Egypt’s BioTech industry.

Hassan told me later, “the VCs are ignorant of the progress and business opportunities available in the local BioTech industry. I’m talking about opportunities in execution using currently available technology, where good returns on investment are practically guaranteed. For example, did you know that there’s no gene-testing lab in Egypt? And there are some really clever minds here coming up with small products that do not require millions to fund.”

The winners of the conference’s student competition gave us a glimpse into these clever minds.  The team from Cairo University’s Space Systems Technology Lab were presented the award for their proposal for “National E-commerce Saving from Internet Cut-Offs Crisis Using Nano-Satellite.” The name might need a bit of improvement, but the idea behind it is brilliant: provide an independent satellite-based backup internet service to corporations.

They plan to build these satellites using off-the-shelf components, then launching them into space using space industry partners in places like India and Turkey. The satellites will be about 20x20x20cm, so “nano” is a relative term, but Egypt would only need 6-8 satellites for cost-efficient coverage. Businesses lost hundreds of millions in revenue during Egypt’s two internet blackouts, so the financial industry alone should be happy to subscribe to an internet service that is in theory independent of both phone lines and the government!

Throughout the conference there was also an outdoor exhibition space for start-ups.  Two notable exhibitors were Eshtery and Imagineers. Eshtery will be launching Egypt’s first virtual supermarket shortly, and Imagineers were showing off their first product, a clever small bookshelf that makes books appear to float!

The conference is another pointer to how the Egyptian ecosystem is growing, and what set this event apart from most is that it opened a dialogue between academia, business and students in a way that isn’t found elsewhere.  Cross-fertilization is a core requirement for any ecosystem to flourish, and this conference managed to spread entrepreneurial pollen on all.