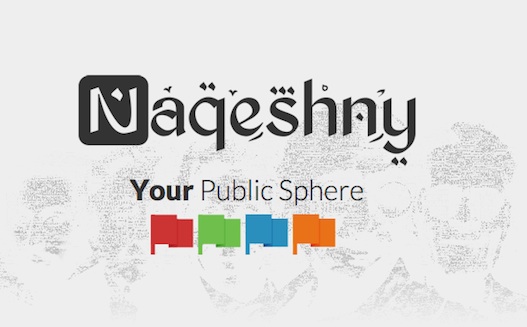 Naqeshny, a new debating social network, challenges its participants to engage on issues, rather than being dragged into exchanges based on political party support. Since its beta launch on May 1, over 2000 users have stepped up to the challenge.

The idea for Neqeshny ("Debate Me") was inspired by the Arab Spring, and the revolutions happening in the region. Although the newfound freedom unleashed active debates through social media, Naqeshny’s founders feel that Facebook and Twitter don’t offer sufficient support for proper debate.  "Facebook only allows for comments, and is unstructured. Twitter also doesn’t allow you to see a debate play out,” says Kareem Diaa, one of the founders of the platform.

Naqeshny tries to solve this problem by combining features from Facebook, such as multimedia posts to support arguments, with the ‘follow’ function of twitter, named “track.” Thus participants can not only track their friends, but also those whose views they find interesting. If they are convinced by arguments offered in a debate, they can show their support by picking a winner. The track function is why Kareem is anxious to emphasize that Naqeshny is a debating social network.

This social function is also stimulated by categorizing all participants into groups. This was born out of Kareem’s aversion to the assumptions and attacks people arrive at on the basis of political party support; “if you post something about the Muslim Brotherhood on Facebook, everybody immediately attacks the party, rather than the argument. Just because you post something about the Muslim Brotherhood, it does not automatically mean that you support their presidential candidate, for example,” explain Kareem.

Rather than foregoing groups all together, the site classifies you as belonging to a virtual party, showcased by color. Colors are assigned at registration on the basis of views concerning issues such as religion in politics and the role of the state in providing welfare. However, with time, and with your voting record concerning issues, you can shift between colors, illustrating a change of views. The groups also allow you to find other users whose views you identify with, or who have different views from your own.

Debates can either be public, allowing everybody to jump in, or private, in which case two participants battle it out, yet other users are allowed to comment on their statements. You can use more than just your rhetorical strength to support your argument; as on Facebook, you can post videos and images for back up. The accumulation of these efforts is judged by peers; participants can vote on which argument they agree with more.

The debating platform is clearly laid out, and the allowance for posting video and images is an improvement to other similar platforms such as Exposix. It also eschews the more formal debate rules upheld by rival site debate.org, allowing for free flowing, though less structured, debate.

However, one can question the social function it aspires to, especially the use of color groups. The goal of placing content at the heart of debate is admirable and it is a shame that within this framework those conveying ideas are classified a priori. The allocation of a label, even one as vague as the colors which Naqeshny provides, undermines the centrality of ideas and participants individuality. Although the founders state that the colors are “a strong indication of what their mindset is,” it works to obscure the system somewhat. “What your color means is something that will become clearer to you with time, and an aspect that we would like to refrain from stating explicitly,” reads the explanation.

This opaque definition undermines the site’s ability to allow debaters to trace their shifts in view; through seeing their color status fluctuate, or gravitate to another party. Although this is an interesting idea, the colors should be more clearly defined if they are to provide insight.

So far, however, this doesn’t seem to be an impediment. The site will launch fully in Arabic and English, adding more languages as it goes global. “Already, I received a request from India,” says Diaa.

The founders are the same team behind web applications design and development firm Mash. The launch was preceded by an intense Facebook campaign, including a video which traced the evolution of language as a form of communication and challenged viewers to embrace and respect differences in opinion.

‘Naqeshny is where your actions speak louder than your words,’ says the website.