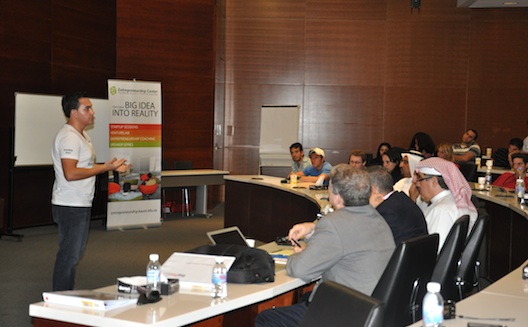 The King Abdullah University of Science and Technology (KAUST) has announced the two winners in its second round of VentureLab, a startup acceleration program at the KAUST Entrepreneurship Center.

The program, which lasts for one semester, is designed to give any member of the KAUST community, from students to faculty members, researchers, and staff, a chance to launch a startup by attending lectures and coaching sessions in the  evening.

This round, the second since the program launched this past fall, has now opened to selected aspiring entrepreneurs in Jeddah, in an effort to include the broader community outside of KAUST. Of the nine teams accepted to participate in the program, five advanced to the KAUST Entrepreneurship Center Startup Showcase Event this past Wednesday, May 2nd.

The focus of the VentureLab is critically on helping aspiring entrepreneurs validate their ideas with customers while building prototypes, said KAUST Entrepreneurship Center Manager Ahmed Abdulwahab. "We don't believe in business plans at the idea stage as they never survive the first contact with customers, but we are focusing on the most essential part of any early stage venture: prototype, customer validation and business model. Our startups must get customer feedback that their product is a need-to-have solution rather than nice-to-have solution; then they develop a prototype."

The goal is to create a culture that encourages failing early and pivoting. "The general statistic shows that most startups fail," says Abdulwahab. "We want to focus on those that make sense to customers, and let ideas fail early and cheap instead of expensive and late."

After posing questions to the teams, the judges assessed the teams based on a general score, their product and market, and business model. The five presentations that made it to the finals, were the most advanced in terms of their customer validation, says Abdulwahab.

Their diligence showed, says Walid Faza, Head of Investments at Wamda. "The caliber of presentations that I saw was high. They were very precise and thorough, and the team members did well fielding questions from the audience. On the whole, they were more polished than most startups we've seen."

M2Pay:  the first mobile payment system in the Kingdom, working in partnership with leading banks in Saudi Arabia.

Shopmate: a mobile application that sends out geo-triggered discounts at different retailers based on personal preferences.

The latter, says Abdulwahab, benefitted from the KAUST program by connecting with executives of major banks to discuss and improve their mobile payment system. As they work to tailor business models from other existing markets to the Saudi market, they will now have an easier time meeting with government authorities to ensure the prototype is up to standards, now that they have the backing of major banks.

What's next for these startups is seeking funding, not only through KAUST's seed funding vehicle but also by applying to business plan competitions and pitching to investors throughout the region.