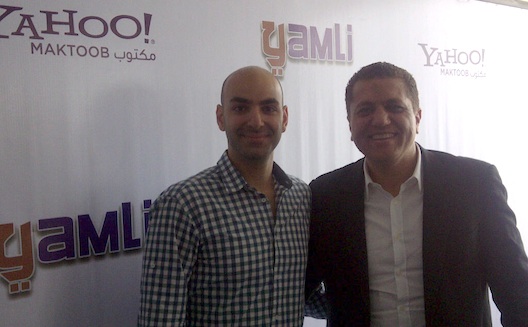 Today marks an important milestone in the life of popular Arabic language startup Yamli, as Yahoo! announces its acquisition of a license to Yamli’s technology.

Yamli, which debuted in 2007 with a mission to “empower the Arabic Web”, offers, as part of its platform, a smart Arabic keyboard that allows users who type in Latin characters to locate the most accurate Arabic term with real-time transliteration technology. The platform also offers other technologies designed to further facilitate navigating the Arabic web.

Yahoo! Maktoob will integrate Yamli's existing technologies into a new product, "3arrebni," or "Arabize me," which has launched on Maktoob's homepage and will be integrated into Yahoo! Messenger, Yahoo! Mail in Arabic, Yahoo! Search, and Yahoo! Maktoob Forums as well as in the comments section of media products such as Yahoo! Maktoob News.

For Yahoo!, the deal, made for an undisclosed amount, complements its goal to create products tailored to the Arab World.

Ahmed Nassef, Vice President and Managing Director of Yahoo! Maktoob, said, "Yamli is a pioneering startup that created a clever solution for a real user need and built it on a robust technology, which remains best in class.  By acquiring a license to the technology, we are able to marry it with our capabilities to further develop it and scale it to a wider audience through deep integration with our products and across multiple platforms.  When looking at opportunities, we seek innovations that add significant value to our offering, and Yamli, with its technology that brings exceptional accuracy and seamless usability, was a natural fit.”

For Yamli, it's a natural fit. While the platform is already popular, with over 5 million words typed per day, mostly from Saudi Arabia, Tunisia, Egypt, Lebanon, Morocco, and Jordan, Yahoo! Maktoob's licensing of the platform will significantly expand its userbase.

The numbers continue to grow on Yamli. Co-founder Habib Haddad, now CEO of Wamda, said, "“Yahoo! established a big success story within the entrepreneurship ecosystem in the region when it acquired Maktoob, and it is great to see it continue to support and work with startups. This deal represents a milestone for Yamli, which over the years has been growing at an incredible rate.  More than 3.5 billion words have been typed with Yamli to date, at a rate of 150 million words per month.”

While Yamli will now be integrated into Yahoo! Maktoob's services, the deal will not affect Yamli, which will remain at its current address, operating as is. The licensing marks a pivot into a new business model for the startup, as the Yamli blog points out: "Yamli’s business model has been shifting from a consumer-based revenue model, focused on advertising, to business to business licensing of its transliteration and other technologies. The Yahoo! deal marks a major milestone in that pivot."