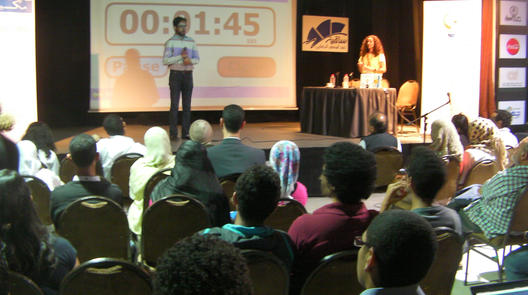 El-Sawy Culture Wheel (SCW), the avant-garde capital of Cairo’s cultural scene, was the location of Cairo’s latest entrepreneurial competition. Around 200 people attended “Get Up Start Up,” organized by Innoventures and the Middle East Council for Small Business & Entrepreneurship (MCSBE).

The majority of the event was dedicated to the “Idea Party.” Attendees registered as “presenters” were given 2 minutes to present an idea for a new venture, and at the end, the rest of the attendees voted for their favorite three ideas. Although the format has been done before, because the event was held at SCW it brought in new faces to Egypt’s entrepreneurial ecosystem.

In second place came “The Map That Talks” by Ahmed Siddik. His idea of an app that works as a talking tourist aide is not new, but Ahmed is a tour guide himself and knows how to work a crowd. In third place came Kareem Ali of Imagineers.  We’ve seen Imagineers before, and their idea of creating small products that help everyday life is always popular with a crowd. Kareem showed the crowd the “floating” bookshelf, Imagineers’ first product in production.

Two ideas that didn’t get traction with the attendees, but which I thought had potential, were “Dress Me Now” and “Check My List.” The first is targeted mainly at women with an app that helps them choose what to wear by giving them the ability to “try” different outfits virtually. The latter is a web-app that simply provides crowd-sourced check-lists.

Innoventures took this opportunity to announce the imminent launch of their “StartUp Circus” program. Think of it as out-patient incubation. Entrepreneurs pay a fee to become members, and membership gives them access to all the benefits normally reserved for incubated companies.  This is a very interesting initiative as it differs from the normal incubation path by giving potentially hundreds of people a year the chance to get incubated, whereas normally incubation would be limited to a few dozen using the traditional “in-house” method.  We’ll cover the initiative in much more detail once in launches this month.

As far as this event went, it successfully reached people other events haven’t, and builds on the good work Innoventures has been doing recently in increasing entrepreneurial awareness in Egypt.