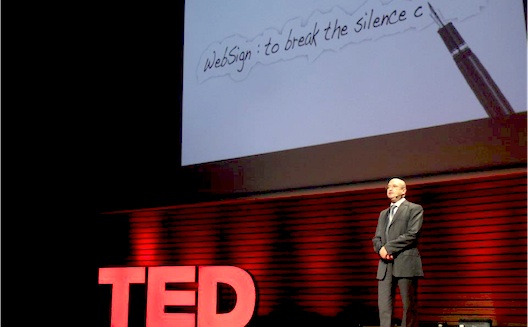 At this point, many are familiar with the TED (Technology Entertainment and Design) talk series, which first brought experts together in 1984 to “give the talk of their lives” at exclusive conferences in Long Beach and Palm Springs California.  Since its beginning, TED has expanded rapidly to include streaming free TEDTalks online, a TED Global event in Scotland and a free license to anyone worldwide to use the TED name to create TEDx mini-conferences; to date there have been over 3,800 TEDx conferences in 117 countries!

This year in preparation for their TED 2013 in Long Beach, California entitled “The Young. The Wise. The Undiscovered,” the TED team embarked on a worldwide talent search to 14 cities covering 6 continents to audition speakers to have a shot at the global TED stage. One of the cities lucky enough to be chosen was Tunis.

TED@Tunis was held on May 8th in Tunis’s Science Center and organized by seasoned TEDXCarthage organizer Houssem Aoudi. Although he was familiar with the format, having hosted 3 successful TEDx events and working for TED in Doha, this conference was in a league of its own. First of all, it was attended by TED founder Chris Anderson himself and global curator Kelly Young Stoetzel, who individually coached each of the speakers before they hit the stage. “The collaboration between the Tunisian TEDx community and Chris and Kelly made this a unique and enjoyable experience. It was great to show a different side of Tunis to the whole TED team,” Aoudi reflected.  Gracing the stage were 18 presenters of all ages from 8 countries covering topics from green building to cultural suicide, and from mixed-media data interpretation to the concept of the Tunisian revolution becoming our new dictator.

As a crowd of 250 attendees, mostly youth, looked on, it was the Tunisian entrepreneurs stole the spotlight; Hassine Labaied presented a groundbreaking new wind-technology and Dr. Mohammed Jemni demonstrated a new application that will revolutionize the way we communicate with the deaf.

Hassine Labaied (a Wamda contributor) quit his job with Citibank in Dubai to move back to Tunisia after the revolution to start Saphon Energy with his friend, partner and inventor Anis Aouini. For the first time in front of a public audience at TED@Tunis he unveiled their new zero-blade technology that will change the way we look at harnessing and capturing wind-energy. The prototype looks nothing like a wind turbine and instead uses sailboat technology that oscillates with the wind in a 3-D motion to maximize the energy captured. As Hassine explained, “the sailboat is one of the oldest wind conversion systems and to date, it is the only system capable of capturing and converting the totality of the wind kinetic energy into mechanical power.” They named their new device “the Saphonian” to reference the cultural heritage of Carthage, as during the Carthagian Empire (814-146 BC), the divinity of wind  was known as “Baal Saphon.” Yet because, wind energy is referred to as “Eolienne” in French, Hassine and Anis are rebranding the name to “Saphonienne” as a tribute to their homeland.

The Saphonian is a breakthrough innovation that is patented by the World Intellectual Property Organization and has just received the Innovation Award by KPMG. Hassine elaborated, “Our aim wasn’t to improve current wind turbine technology but rather to come up with a radical new solution through a lateral thinking process. Our basic idea was to replace the whole rotating system with a new non-rotational mechanism largely inspired by the sailboat.“ Empirical tests have shown that the Saphonian efficiency level is 2 to 4 times as high as that of the 3-blade wind turbine and even has the capability to convert and store the energy efficiently.

Thanks to this innovation, Hassine has been pre-selected to go to this year’s TED Global in Edinburgh, Scotland and will be the first Tunisian ever to take the TED Global stage on June 25th. Needless to say, this might very well be the technology that catapults Tunisia onto the global map of innovation and entrepreneurship. I like to think of it as our Skype, before which, few knew exactly where Estonia was.

Another inspiring Tunisian to present a breakthrough technology was, Dr. Mohammed Jemni a Professor at Ecole Supérieure des Sciences et Techniques de Tunis (ESSTT), University of Tunis, Tunisia. He is an expert in e-learning tools, adaptive and adaptable educational hypermedia, and ICT accessibility for disabled users. During TED@Tunis he unveiled a new series of tools developed by his organization WebSign, “based on the technology of avatar (animation in the virtual world). The input of the system is text in natural language. The output is a real-time and on-line interpretation in sign language by an avatar. This interpretation is constructed thanks to a dictionary of word and signs.”

Admirably, his goal is to share this technology on a non-profit basis with educators, students, users, and researchers and to encourage its wide use by different communities.

On the whole, TED@Tunis was a shining reminder that Tunis can become a place where ideas can be shared and spread, where no one should have to censor their thoughts or their speech and a place where people from around the world can come to participate and be inspired.