It's always good to reflect on whether we're having any impact on the startups we profile- after all, we are obsessed with writing about entrepreneurs in the region, tracking their growth, and highlighting their challenges, but it's good to ask, does this have an effect on the startups themselves?

Skills exchange community startup nabbesh recently surprised us with this piece of analysis on the impact of the Wamda Media Arm, and at the risk of tooting our own horn, we're going to share it with you.

Here's what nabbesh founder Loulou Khazen had to say why she wanted to analyze the effect our recent article on nabbesh had:

"Rather than blindly trust in the power of media exposure, we wanted to run some metrics to determine whether or not getting a story in the press helped our brand. We discovered that, in fact, having an article on Wamda brought six times more traffic than usual to nabbesh.com in the first week after the story was published, translating into 24% conversion rate in the form of new subscribers. It also helped us achieve a good level of engagement on social media."

"The right exposure for startups is critical," she said. "My advice for entrepreneurs is to promote your services on carefully selected media with demonstrated effectiveness in drawing traffic to online businesses, such as Wamda."

It's great to know that we're helping, but fortunately also nabbesh isn't the only one to find tangible outcomes; some others that we chatted with have seen outcomes outside the digital space in terms of connecting to potential partners, teammates, and getting more traction.

May Habib of Qordoba says that Wamda Media helped her build her team, as a senior candidate approached them after reading an article about them on Wamda (disclosure: The Wamda Capital Fund has invested in Qordoba).

Moe Ghashim of ShopGo says he started to receive questions about e-commerce since they started publishing their articles giving technical advice in e-commerce, as part of our "Demystifying E-Commerce" series.

iOS game Birdy Nam Nam, which had 117,000 downloads on its first day and went on to have around 450,000 downloads in its first month, was also affect by Wamda's announcement of its launch. "Describing the game as 'Angry Birds Now Attacking Arabia' had a viral effect that made people curious- it was enough to get the ball rolling," says Lebnan Nader, one of the game's creators. "Hundreds of tweets and retweets were good enough to generate a snow ball effect. I remember a lot of blogs and magazines were suddenly interested in getting in touch with us to discover this "concept" that Wamda described in our game." By its 7th month, the app reached 1.7 million downloads.

Jalil Allabadi of AlTibbi said, "It had a great effect, which was surprising to me at the beginning because many pieces were written about AlTibbi before but no one had ever contacted me because of them. Wamda's article was shared and retweeted by many industry leaders that we had only dreamt about meeting. Many potential investors contacted us, and advertising agencies contacted us as well...starting 30 minutes after it went live. So it has definitely affected our business."

For us, the most important take-home from these outcomes is that a global and regional audience cares about startups in the region and leading startups are also creating opportunities for others. And thanks to our readers- please continue to offer a critical perspective on startups (don't hold back!), letting us know what you like and don't like, and which startups have inspired you recently. 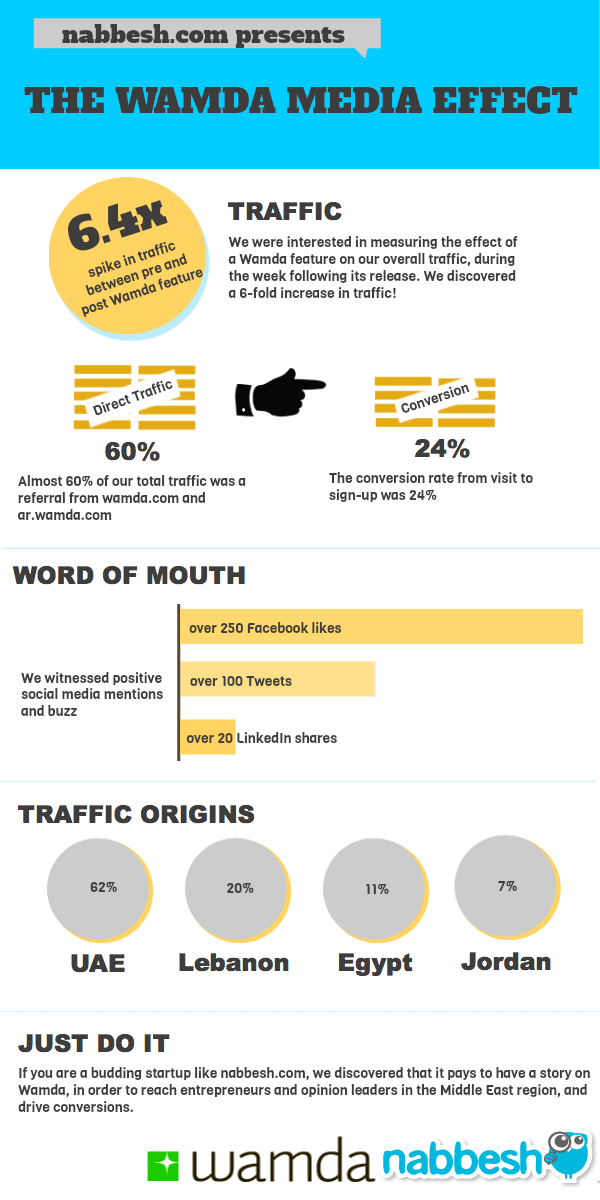