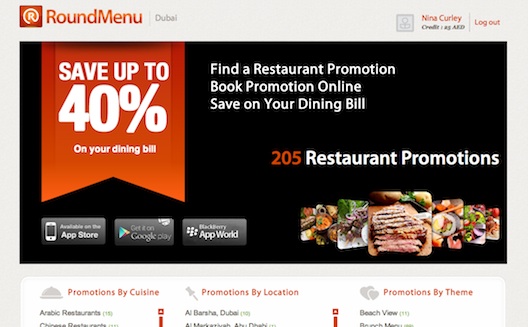 After launching just over a month ago, RoundMenu has closed its first round of investment, for US $730,000, led by HoneyBee Tech Ventures, the venture capital firm run by the startup's founders, Ihsan and Zaid Jawad and and Husain Makiya.

The app, whose business model we discussed in July, allows users to buy discounts and deals at restaurants over their mobile phones via SMS.

The funding round, as The National initially reported, also included Beco Capital, which is backed by former Bayt.com co-founder Dany Farha, food supplier Horeca Trade, and a fourth anonymous backer. Including a food supplier was a move designed to expand the concept, co-founder Ihsan Jawad explained to Wamda.

"We're working with Horeca to get introduced to more restaurants. They've been in the restaurant supply industry for decades," he said, explaining that their name is derived from the words hotel, restaurant, and cafe. "We're hoping to get valuable advice."

"$730,000 isn't a huge amount," admits Ihsan. But slow and steady seems to be the name of the game for HoneyBee and the ex-Zawya team. Zaid Jawad pointed out that he tested the idea for RoundMenu for two years before they decided to launch. This approach could be good for the ecosystem- less talk, more testing.

"We're taking our time to incubate the startup and give it support to make it a strong standalone business," says Ihsan. For now, HoneyBee Tech Ventures continues to fund in-house projects, but that may change in the future.

Just on the heels of LivingSocial's exit, which has caused some to point to the difficulties in daily deals sector globally, this model offers an alternative. Users purchase discounts that are listed on the RoundMenu mobile app, confirm them over SMS, and then use them on a specific day. The deals themselves- of which there are over 200 on the current site- never expire. The model also gives merchants an exact sense of when the deal will be used, unlike daily deals.

"This model focuses on m-commerce and addresses what is convenient for the user," says Ihsan. "Taking payments through telecom companies is not as lucrative as  credit card, but it's more convenient."

Indeed, as The National reported, RoundMenu charges 5 AED (US $1.36) per discount and gives 2 AED of that to the telecoms, making US $0.81 per transaction. But if it takes off, that will amount to steady income. Thus far, the application has seen 8,500 downloads and has seated 5,200 guests in the month of July alone, says Zaid Jawad.

"Believe it or not, we found more demand than expected and had to cut back slightly," says Ihsan. But now this round of funding will go towards expanding the company, next into Lebanon and Saudi Arabia, and hopefully make it cash flow positive within the next 18 months, he says.