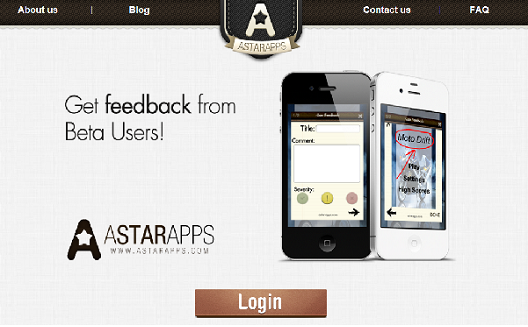 In Egypt, A*Apps (“A Star Apps”) is developing a unique platform that allows mobile app developers to test their apps through crowdsourcing. The process is designed to afford developers a better testing service for a lower cost than if they hired professional testers.

Founders Moataz Soliman and Omar Gabr have developed the project, incubated at Flat6Labs since mid-June. A*Apps pools a diverse set of app users into their platform to create a crowdsourcing database for app developers to choose from.

Through the use of tester profiles and reviews, app developers can make informed decisions about who they choose to test their apps.

At yesterday’s Flat6Labs Cycle 2 Demo Day, the A*Apps teampresented their work, standing out among 6 inventive new startups. The audience of investors, media, and peers were excited by the project, many asking for demos and further conversations with the leadership team.

Soliman explains that without A*Apps, developers have to go through the tedious process of sending their apps via e-mail to individual testers who have to connect and sync their phone to their computer and download the app via a wired connection.

Whenever a tester wants to report an issue, they must take a screenshot and type an e-mail explaining the issue to the developer. Receiving hundreds of unorganized and unprioritized e-mails, developers have to sift through the feedback and respond when they can. A*Apps makes this entire process easier for both developers and testers.

It’s simple and straightforward. Developers upload their apps to A*Apps by downloading the free A*Apps SDK and include a single line of code in their beta app, initiating the testing and feedback functionality. Developers can then invite the testers they choose from the platform, sending them a personal invitation through A*Apps. The platform currently supports iOS, but the team anticipates the launch of Android support by the end of October.

After receiving an invitation, testers download the app straight to their phone through A*Apps and simply begin testing. To send feedback, A*Apps has developed a unique feedback form, initiated by an easy shaking of the phone. A screenshot is taken automatically, and testers can use freehand writing to highlight or circle the spot that needs attention. Testers also fill out a short feedback form and send it to A*Apps right on their phone.

A*Apps organizes the feedback and develops a report which is automatically prioritized and sent to the developer.

Once testing is done, the developer can release their new app as an A*App and testers receive a rate set and paid by the developer. A*Apps takes a small commission from the developer at each testing cycle. It’s a sleek and innovative process that makes app testing much more manageable than the normal cumbersome and time-consuming process of using professional testers.

To begin their experience, testers create mini profiles on the A*Apps platform, allowing developers to add reviews and rankings for each tester. Rising through the ranks, testers will be featured on A*Apps hall of fame, an easy way for developers to know which testers to invite to preview their apps, streamlining the developer-tester relationship.

Another unique features is that A*Apps will provide developers with access to usage and device analytics for each user while they are testing the app, one of many tools A*Apps will be rolling out before the end of the year.

A*Apps has already signed 40 developing companies to their service in the month since they completed the platform.

Developers have begun testing their apps, allowing A*Apps to build up their network of testers by encouraging developers to invite their connections and testers to join. The A*Apps team will be launching the final platform with full crowdsourcing functionality by the start of 2013 after building up the tester network and allowing new users to sign up on their website.

He adds that professional testers often use the same testing techniques as developers, making crowdsourced testing a more meaningful and useful process. A*Apps believes their platform will help developers to avoid negative reviews upon release by crowdsourcing from “normal users.”

The A*Apps team wants to give developers the freedom to make testing as effective and individualized as possible. Developers can set the rate they pay testers (if they invite friends to test the app they can even set the payment rate to $0), set the length of the testing period, decide the number of testers they need, and choose to invite individual testers based on an informed reviewing system.

A local Egyptian team with the potential for global impact, A*Apps is a powerful new startup offering several sleek and useful features to their users. The team will be moving into their own office space in a couple of weeks after launching out of Flat6Labs with a strong footing in the mobile apps space.

They have ambitious plans for the next few months but, with the impressive development they’ve shown so far, the team will certainly rise to the challenge.