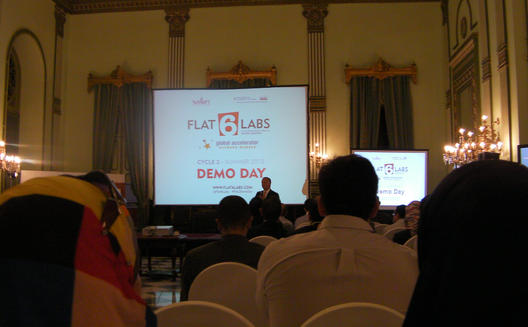 Flat6Labs, the Cairo-based accelerator, held its third demo day event on the 17th September, dubbed the “Cycle 2 Demo Day”. Not only did the event mark the culmination of the three month incubation for the six graduating start-ups, it also marked the end of one complete year of operations for Flat6Labs.  It looks like one year on, Flat6Labs is beginning to hit its stride.

The day’s format was similar to previous Demo Days; an initial session for the teams to talk to the media, followed by the startups’ presentations to an assembled gathering of the great and the good of Egypt’s entrepreneurial ecosystem, followed by networking. Each Demo Day has been more lavish than the last, and this time we were in the five-star surroundings of the Marriott on the Nile. While the surroundings were certainly plush, the food turned out to be standard Egyptian five-star hotel food, i.e. it looks gorgeous but has the tastiness of cardboard ... but that’s a rant for another day. Thankfully, the startups provided much more succulent offerings, and that’s the real reason we all attended.

Many things set this Demo Day apart from the two previous ones. First, there was much more variety; although all of the startups were technology led, there were multiple industries covered, as well as the first hardware offering and the first all-female team to come through the Flat6 mill.  Secondly, AStarApps, Hub43, and Integreight all broke new ground globally, not just regionally. Thirdly, the presentations were better on the whole, with SolverMine and Yadawya in particular standing out.  Lastly, and probably most importantly, all the teams had a very well-defined market, with a clear and straightforward monetization strategy that required an evolution rather than a revolution in the mentality of their respective customers.

How much of this all around improvement has come about from a better selection process, better mentoring, a larger selection pool, or a general development of the local ecosystem is hard to tell.  What is clear though is that Flat6 are set to reap the benefits. Chairman of Sawari Ventures Ahmed El Alfi revealed some interesting statistics during his speech.

Flat6Labs has spent nearly 900K EGP (US $150K) to date.  People in Europe and Yemen have applied to be part of the next cycle.  In fact, Ahmed revealed, Flat6 are thinking of opening a branch in Tunis amongst other places.  Of the twelve previous companies to have graduated, six have secured a second round of funding which on average valued the companies at well over ten times their valuation in the initial seed round.

Interestingly, these impressive figures caused a bit of dissent later on in the evening amongst some of the people that Flat6 uses as mentors, speakers, and trainers (MST). It suddenly dawned on them that they’ve been giving their time for free, but that time has actually turned out to be worth a tidy sum ... to someone else.  I have to state now that it’s the norm in Egypt at present for Egyptian MSTs to give their time freely, I’ve been happy to do so myself, but this is normally to not-for-profit organisations.  Also, mentors specifically, are often happy to volunteer their time for free, even in developed economies, simply for the exposure or experience.  But it’s also fair to point out that it’s the norm for trainers and speakers to get paid in those countries even though they provide a very similar service.

The key point here is that many Egyptians have seen foreign MSTs get paid for their time, whereas at the same events Egyptian MSTs get nothing.  Any shrewd capitalist would also tell you at this point that there’s absolutely no reason to pay for a service, no matter how valuable it is to you, if you know you can get that service for free. So it’ll be interesting to see how soon Egyptian MSTs will start to value their time differently in situations like this. Egyptians have often complained of a lack of respect from foreigners, and the first step to remedying that is for Egyptians to respect themselves. In a business setting, there’s little that shows respect more than money changing hands.

One thing looks certain. The startup accelerator known as Flat6Labs looks sure to gain more respect.  I look forward to their next Demo Day.