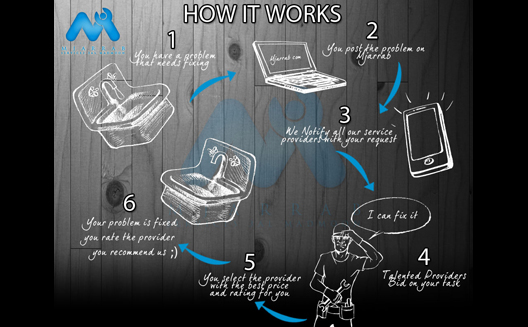 Mjarrab is launching a new twist on a traditional service: household repairs.

The concept makes sense; sourcing your own repairmen in Jordan is a headache, and many seek recommendations by word-of-mouth to try to find someone reliable (a method hardly limited to home repairs).

The last time Wamda covered the story of a home repair company in Jordan, however, it was the crash and burn of startup Edmun Baitak, as it came apart at the seams after rough investment choices, difficulties hiring, and employees trying to take the company over… while trying to educate the market about the benefit of a yearly subscription fee for unlimited home repairs. He fought hard, but when it finally closed, founder Elias Jaber seemed like a bull down for the count.

Mjarrab's founder Khaled Riyal is a different breed. He's 27 years old, and already runs a software company, Kensoftware, that's won awards, and now he's launching a bidding platform that crowdsources both the repairmen (and women) and clients- online and over SMS.

Mjarrab, which means "tested", doesn't go door-to-door. Rather, customers with toilets that need fixing (or any household task) can submit their issue on the website for free. Mjarrab then sends out an SMS blast to its network of service providers, targeting the ones relevant to that task, and service providers submit bids. The customer then selects a bid, taking into account the price and the site reviews, and is connected directly with the provider.

Like any crowdsourcing endeavor, Mjarrab will depend upon gaining a critical mass to be successful. But the fact that customers don't pay any fee for using the site, unless they want premium services, will make it a no-brainer to join. Riyal has built a product for his market, allowing customers to operate over SMS. "You don't need to understand the internet into order to use Mjarrab," he points out.

By sending out SMS ads all over Jordan, running a Facebook campaign, and leveraging word of mouth since its launch at the beginning of July, the site has brought onboard a network of 105 service providers.

But can it monetize effectively? The revenue plan works by charging those providers 10JD (US $14) a month, a fraction of what other services charge, says Riyal. Then, for customers willing to pay a premium, Mjarrab will offer access to an in-house team of Mjarrab Certified workmen, who come with a 1000JD damage guarantee (five are currently available).

There's always the danger that providers will circumvent the platform, contactly providers directly once they have the number, but minimizing that issue is built into the nature of Mjarrab. It's not necessarily for those who want to stick to the same plumbers; it's for people who want to get the job done as quickly as possible for the lowest bid. The company also doesn't give customers' numbers directly to the client, to avoid their receiving unwanted calls.

To reduce costs, Mjarrab has also secured a sponsorship package from telecom company Orange that includes 10,000 SMSs, to help with the company's central expense.

So in contrast to the brick-and-mortar approach of Edmun Baitak, Mjarrab seems primed to take the sector online. As it adds service outside of the household, including designers and developers, it could become a go-to platform for startups to find freelancers and parttime employees. In that case, the platform will come into direct competition with tasmeemME, which is also moving towards a more hands-on approach. "We have graphic designers, developers, anything you can think of- people are adding car painting," says Riyal.

The biggest difficulty is, again, simply ensuring that the demand is there and customers understand the product. But by going through SMS, Mjarrab will lower the barriers to use, and, by sourcing household repairmen, Mjarrab is going after a segment of the population that needs consistent work.

With telecom policy shifting, and political tensions on the rise, it seems there's no time like the present to provide a platform for consistent parttime or freelance work in Jordan.