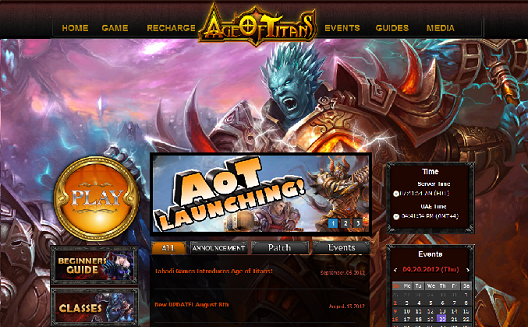 At first glance, the login screen feels like a familiar U.S.-developed game with stunning visuals, bold graphics, and a dark ethereal motif. Then, revealing some Arabic flair, the login form asks you, “What does your mother call you?” You have the choice, “habibi,” or “habibti.”

Tahadi Games, a UAE-based game publisher of such online multiplayer games as Point Blank, Runes of Might, and Ragnarok, has an impressive track record of successful online multiplayer games. They pride themselves on easy access to their games, stating that users only need a computer and internet access to be enveloped in a new adventure. I signed up using a Facebook account and was able to play their new game in less than five minutes.

Age of Titans is a free new MMORPG (Massively Multiplayer Online Role Playing Game) that Tahadi Games published earlier this month. The game plays like a mini version of the popular games Diablo or World of Warcraft (WoW) and works in any major browser. In fact, many of the visuals and color schemes remind me of scenes and gameplay in WoW, an epic and cartoon-like virtual world that pulls the player in.

The game allows players to choose from four classes, Berseker, Crusader, Legionnaire and Mage, each with different abilities, playing styles, and looks. The characters can be customized to reflect a gamer’s preference with several options for hairstyle, hair color, and facial features.

I would have liked to see a bit more customization ability, such as choice of gender or species, but there is enough to keep your character interesting and unique. Gameplay is “hack and slash” as Digital Marketing Manager, Adeel Ahmed explains, with a quest-based game style. Players are able to enter “daily instances” to fight bosses and work their way up the 60-level character development chain, unlocking new abilities and epic new battles.

One feature I enjoyed, which I haven’t seen in other MMO’s is the “dungeon finder” and visual golden trail. A player can choose a point on the pop-up map and command their character to walk there automatically. This allows the player to prepare the character for the next encounter while the character is on auto-pilot to the next location. I also enjoyed the epic grand story line, charging players with the task of collecting valuable diamonds, earning respect in the world, and ultimately challenging the evil titan Erebus.

The NPC’s (non-player characters) are taken straight out of Greek mythology, leading players into an imaginative world with familiar caricatures of centaurs, demi-gods, and elementals. It was easy to jump right into the game and figure out the controls, with enough choices along the storyline to keep the game interesting and personal.

The Tahadi team monetizes the game by selling in-game content for players to purchase upgraded weapons, armor, and other equipment. The entire map and story is available to all players for free, but players who pay small amounts of a few dollars for each item can purchase more powerful equipment. Players have been joining the adventure from across the MENA region, with the highest concentrations in Egypt and Saudi Arabia.

Tahadi Games has an ambitious agenda, launching regular new online multiplayer games amidst staunch and established international competition. Games like World of Warcraft, Diablo, or Guild Wars, haven’t seen much penetration into the MENA region, and Tahadi has the vision to fill that gap.  As a teaser, their next big game, Knight Online, focuses on player vs. player (PVP) gameplay, continuing their MMO focus, and increasing the competition between players.

It's good to see the company picking up speed in the past year, following a lull after Ragnarok was released in 2009. Last year, twofour54 invested in the Jabbar-built gaming company, and in December 2011, Tahadi released its popular multiplayer shooter Point Blank. Now that Tahadi has released Age of Titans in both MENA and Turkey, it will be interesting to see how the Turkish market responds to the title, and if Tahadi (@GamesTahadi) is able to successfully export there.