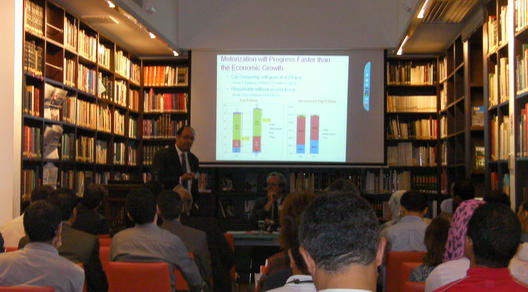 Ever thought about using a bike for your routine travel in Egypt?  This distinctly lo-tech solution to the country’s traffic problems was the subject of the “Cycling in Egypt” all-day seminar held at the Nederlands-Vlaams Insituut In Cairo (NVIC) on the 18th October 2012.

The seminar was a joint effort between the NVIC, The Dutch Embassy, and Green Arm (a division of Nahdet El Mahrousa NGO).  As such the speakers were split between Egyptian academics and activists, and Dutch transport experts.  The Netherlands is of course the world leader in cycling as a means of transport, and their experts travel the glove promoting cycling as the most sustainable form of transport.

Prof. Khaled Abbas, a transport consultant and board member of several transport organisations in Egypt, pointed out in his talk that Egypt is already ready for the introduction of cycling as a major means of transport, because nearly 30% of of routine trips here use “non-motorised transport” i.e. walking, biking, or animal cart.  The common reasons given for why people are discouraged from using bikes are road safety, cost, and harassment - especially sexual harassment of women.

Egypt’s road are admittedly some of the most dangerous in the world, yet many of the Dutch staff at the NVIC cycle to work regularly through Zamalek’s busy roads, so it is doable even now.  And frequently in our busy streets, cycling is actually quicker than the car. As for cost, a good bike is not cheap, but it’s cheaper than running a car, and it doesn’t have to be top of the line to get you from A to B.

Dr. Ahmed Mosa, associate professor of transportation planning at the German University in Cairo, also pointed out that Egypt loses 4% of its GDP on congestion.  That staggering figure is enough for any government to take note. The promotion of cycling makes absolute economic sense, even more so as motorisation is increasing faster than economic growth!

Leo De Jong, founder of the Keypoint Consultancy and former Departmental Head at the Ministry of Transport in Kenya, spoke about his experiences in sub-Saharan Africa, and showed examples of successful cycling projects in hot countries similar to Egypt.  He stressed that designing cycle initiatives required a multi-disciplinary approach that took into account current infrastructure, sound engineering skills, integrated policy, and lots of attention to human behaviour.

He noted that “whatever you practice you have to preach,” so he always cycled to work when on a project to set an example.  It might be a good idea to get a high profile celebrity to publicly endorse and use a bike as an aspirational example to follow, he suggested, especially for the middle classes that have become lazy due to deliveries, drivers, and the prestigious image of the car.

Dr Mark Zuidgest, Assistant Professor of Urban Transport at University of Twente and Secretary of the International Cycling Academic Network (CAN) further expounded on the social aspects.  He told us that the Netherlands has 16 million people who own 16 million bikes and make 16 million bike trips per day!  The bike is seen as an egalitarian vehicle, everyone from the royal family, government ministers, to the average citizen used the bike for routine transport, whatever the weather.  The cyclist is protected, in any crash between a car and a bike, the car is always at fault!

He also noted that when there are lots of cyclists on the roads, that brings average speeds down, and makes the roads safer overall. He told us that the Netherlands got to this point through the use of the 3 Es: Engineering, Enforcement, and Education.  The last two Es are key in Egypt, especially regarding harassment and keeping lanes clear.

I came away from the event educated. I used to cycle here when I was younger, but now I make excuses not to. The speakers’ experiences around the glode showed us that there are countries as hot as ours, as busy, as sexist, as lazy, as obese, with infrastructure that’s worse, and yet they’ve implemented successful cycling initiatives.  The key is will-power, especially from government heads.

So if anyone from the government is reading this, get on your bike, cars and clever mobile apps aren’t the solution to everything, sometimes it’s good to go back to basics and work up a sweat.