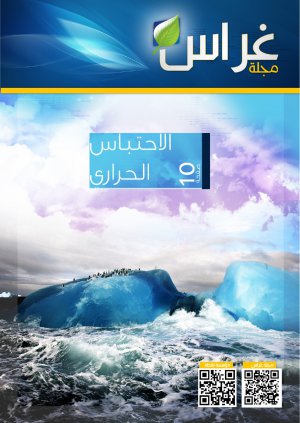 More often than not, those who write in science journals are scientists rather than scienctific journalists. While several western countries have evolved in the field of specialized journalism, the space is still relatively unexplored by Arab journalists.

With this in mind, Abdel Karim El Ouweir, Editor in Chief of Grass magazine, introduced the Nok6a Network, a project for online scientific journalism that tackles topics including engineering, the environment, biology, psychology, media, and literature.

One of the network’s major branches, Handasa Net, originally focused on engineering, but has started a new project, issuing their first Arabic e-magazine in October. The publication, Grass, focuses on environmental science.

When it to comes to the Arab world, several questions come to mind when you hear the word “environmental magazine": Will it address professionals and focus on in-depth reporting? Or will it try to attract a general audience and simplify science?

Grass tries to appeal to both by adopting a professional approach to writing that meets the criteria of scientific research, as well as presenting blog-style content that attracts a larger informal audience.

A better understanding of the environment is critical in the Arab world, especially as it affects daily life with issues such as water scarcity, deforestation, and climate change and the social, economic, and political implications of these issues on many parts of the Arab world.

El Ouweir explains that effectively addressing both audiences is the main challenge they face, “We did research on specialized scientific magazines in Britain, Germany and other countries to see the writing style of scientific publications, especially concerning the transportation sector. We have come to the conclusion that such a publication needs to be adapted for the Arab world because scientific journalism itself is new here.”

The e-magazine’s team consists of 15 young journalists, researchers, and science students from Syria, Palestine, Morocco, and Oman who work mainly in the environment section of the Nok6a Network. There are also contributions from volunteer readers and researchers included in the magazine.

Grass has reached a readership of more than 1,000 people since it was launched last month, and the team is currently developing a mobile issue that will be available for Android devices.

The Birth of Science Journalism in the Arab World

El Ouweir hopes to find the funding needed to issue the electronic magazine in print, a need of between $7-10,000. The very first issue was published a year ago, but continued production was interrupted due to a lack of funding.

Today, El Ouweir is trying to expand the magazine’s reach through individual initiatives by trying to market the content to a specifically targeted audiences.

The project is non-profit, but the magazine is published by a British company where Syrian-born El Ouweir currently lives.

The Grass team hopes the publication will be able continue until funding is found to develop the hardcopy publication and reach a wider readership. The real question is whether there is an appetitive for such content in the Arab world.