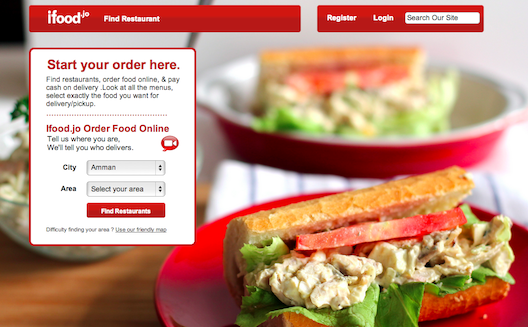 Jordan has changed in a variety of ways since I lived there a year ago; perhaps a small win given the recent turmoil is that it’s become much more convenient to order food for delivery.

When I lived in New York, take-out was a fact of life, Seamlessweb a standard. Ordering delivery in Amman, however, initially demanded a return to collecting paper printed menus and explaining addresses over the phone.

Now that I don’t live in Amman, I’ve been slower than most to hop on the delivery app bandwagon, but after testing iFood.jo’s iPhone app, I’m a new convert.

I have to admit, iFood.jo did not get my vote easily. Initially I was skeptical about whether a food ordering service in Amman would be worthwhile. Why order through the web when it might be faster just to call? Calling through the Jeeran app is very straightforward. And how could I be sure the outlet would get the order in a timely fashion?

But there’s something uniquely appealing about ordering directly through an app. Enter your address once, select items from the menu, designate how you want them (“medium rare”?), click send, and in 30-45 minutes, it’s there. That’s really no better than New York. You can confirm the address over the phone and pay cash (a credit card option is coming).

Had I not had the iPhone app at my fingertips, I might not have discovered how great the ginger cookies at Sugar Daddy’s are. But being able to search by cuisine on iFood.jo makes add-ons convenient; this and its mobile app distinguish it from its competitor Eat-Now.jo and Ju3an, or menu sites AmmanSnob and Tasree3.

But can it be profitable?

Let’s talk numbers. Since launching on January 1st of this year, iFood.jo has racked up 69 restaurants, partly thanks to some exclusive deals with Amman favorites.

When they first launched their iPhone and iPad app in July, iFood rose to #1 in the Jordanian App Store within the first 4 days. Since then, they’ve seen over 7,000 downloads, racked up 6,500 “loyal” users, and, while bootstrapping on a small budget, are making “more money than expected,” around $15,000 per month, says co-founder Zeid Husban, by charging restaurants a US $150 fee per month to join the service in addition to a 10% commission on each order.

Fast food restaurants that drive a lot of traffic, like McDonald’s, are offered lower commission percentages to suit their lower margins, says Husban. Restaurants that don’t want to pay cash for their presence on the app and site can compensate iFood.jo with food vouchers for, say, double the value ($300).

These vouchers are given away as part of iFood’s rewards program, which offers “Buy 2, Get 1 Free” promotions and even auctions of smartphones like the Samsung S3 or iPhone 5 to keep customers loyal.

Inevitably, some iFood.jo users end up simply calling the number listed on the app, but iFood tracks this data based on the number of clicks on telephone numbers. Some vendors also track it themselves by submitting a special number to iFood. Either way, says Husban, “restaurants get a sense of how much marketing they’re getting.”

Thus far, iFood is doing about three times the number of daily orders as their closest competitor, says Husban- a total of around 85-90 orders on a given weekday and up to 140 per day on the weekends.

Partnerships with other platforms are a natural next step for the growing platform. It’s already partnered with reviews site MealAdvisors, to allow iFood.jo users to read MealAdvisors reviews while their site’s users can order directly through iFood. Partnering with sites like ReserveOut to offer online table reservations is also something the iFood.jo founders can imagine.

To ensure they can expand, the team has recently re-built their backend system, with an under-the-hood re-launch planned this month. “We had to rewrite the software in order to scale to other countries”- Lebanon, Saudi Arabia, or the UAE in 2013, says Husban- the team hasn’t decided which (something tells me future partners or investors may help dictate that process).

An Android app is on its way soon, hopefully in time to help Google fans order during the rainy season.

Husban, who previously launched a similar startup in Canada when he was 21, seems to know the company’s limits. His biggest mistake there was “dealing with delivery.” Reflecting on the recent closure of Wheels Express, Husban reiterates his desire to focus solely on ordering. “The operations, the cars- it’s a headache, and tough to scale.”

If iFood can stay focused and successfully expand into at least one other market without going bust, I’d say they’ll be able to take it fully regional.

What do you think- do you use their app?