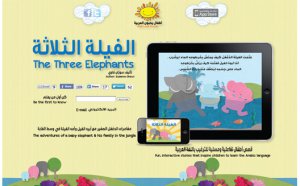 Many parents, including myself, invest time and money trying to find an educational application for their children, to keep them from spending hours wasting time on games like Angry Birds and Fruit Ninja. Clearly there are not enough mobile applications with an educational focus for kids in general, much less those learning Arabic.

Arabic digital content for children is rare, a fact that Mohammed Ghalayini and Ahmed El-Kadars of Kids Love Arabic (KLA) are trying to change. Growing up in the Arab world, between Kuwait, Jordan, and Egypt, then moving to the US and Canada, Ghalayini and El-Kadars co-founded the iPad app development company earlier this year.

Last month, they released their first story, The Three Elephants, an application to help kids get more familiar with the Arabic language in an interactive way. The app allows parents to take part as well by reading the story to their children and watching small paper cutout characters move around the screen together.

Education applications for kids is a globally hot and growing sector, especially given the rise of tablets. “A lot of disruption is happening in the education vertical for kids, via touch devices," pointed out Dave McClure of 500Startups at Wamda's Mix N'Mentor event in Dubai. It's taking off in the Arab world, as well, especially in Egypt, where SachaBooks has launched a library of interactive Arabic digital stories, Weladna, is building digital content for kids, and three mothers have launched Ketaaby, a series of apps to teach children Arabic. 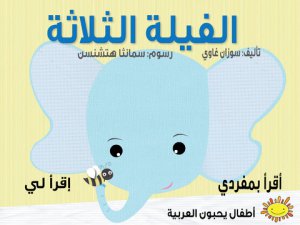 When they first launched Kids Love Arabic, Ghalayini and El-Kadars considered building an Arabic song website, but after extensive research and monitoring of "what's working in the West," as Ghalayini says, the team realized that the presence of Arabic content on mobile devices for children was severely lacking and decided to take advantage of the opportunity.

To launch their first story, the two co-founders met with Palestinian-Jordanian writer Suzanne Ghawi, who has already published 25 books for kids in Arabic. She wrote The Three Elephants, the first original story to be publishid on KLA.

To adapt the book for iPad, designer Samantha Hutchinson joined the team and made the piece friendly for children between 3 and 6 years of age who have experience with electronic and mobile devices.

"We had to focus on the quality, the colors, the sounds, the illustrations, the interactive features to make sure it appeals to a kid", says El-Kadars. Listening to what kids want and where their passions lie was the most important element of launching The Three Elephants, he adds.

Released on iPad less than a month ago, The Three Elephants will be available on iPhone by the second week of December. While it's had a slow start, the team is planning a grassroots promotional campaign to spread awareness of the application throughout the Middle East.

Competition and Next Steps

When it comes to competitors, the team considers their main strength to be their original stories, advanced graphics, and carefully chosen words, audited by Arabic language experts. There's plenty of room in the sector, however, and they aren't facing any major challenges just yet. But El-Kadars admits, "We've just launched; the big challenges are yet to come."

"We are looking into releasing a sequel sometime soon, but games are not a choice for now. We do not want to become a gaming company. We might add exercises like creative drawings, but we will take it one step at a time after testing the market carefully,” says El-Kadars.

Back at home, I've tested it on my 3-year-old son. It seems The Three Elephants is a good choice if your child has a long attention span, and embraces bed time stories quietly. The interactivity of the application, when touching one of the characters, is indeed very appealing for kids, but could also be a distraction from listening to the rest of the story. This app could be a good start, to introduce children to good Arabic stories, but it definitely needs some additional features to incite longer attention from the kids using it.