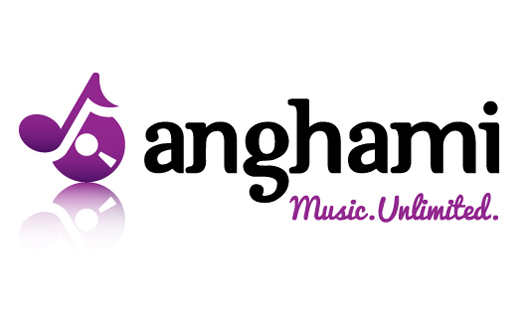 “Once launched, this will be the largest catalogue of international and Arabic music online in the Middle East,” says Strategy and Business Development Lead George Audi.  The platform will offer close to 2 million Arabic and international titles, from Shakira to Fairouz, by the end of the year, in a sexy little app that allows users to swipe through titles and share them with friends directly on Anghami or over Facebook and Twitter.

It’s geared towards the region’s mobile-happy consumers- Anghami allows users to stream several  hours of music a month over their mobile for free. While regular users will have to request an invite, the first 100 Wamda readers to sign up using the promocode wamdalovesanghami will receive a direct download.

“We’ll give you enough music for a party,” Audi points out. If users take social actions, such as creating playlists and sharing it, they can gain extra playing time.

Spotify, which isn’t even available in the region, only offers free streaming on web, not mobile. A premium account at Anghami, similar to Spotify, offers users a chance to access unlimited music and stream music offline; somewhat critical in a region where access to internet can be spotty. In fact, the team has spent time honing the app to ensure that it works on the notoriously bad mobile networks of Lebanon, configuring their Dolby music encoding to stream high quality on a low bandwidth.

At $5 a month, unlimited access on Anghami is less than half the price of Spotify. “That’s the same price as only 5 songs on iTunes,” Audi points out. (If your country has it- Saudi Arabia, UAE, Kuwait, Qatar, Bahrain, Oman, Lebanon, Egypt, Syria, Algeria, Libya, Yemen, Palestine, and Pakistan, to name a few, don’t).

By being 100% legal, Anghami also circumvents the headache of dealing with piracy sites. “We’re pirating the pirates,” Maroun told Wamda in an interview at Arabnet this spring. “Piracy will be our biggest competitor,” admits Audi, “But we’re guessing that eliminating the time you spend on pirated content, dealing with incorrect songs, bad quality, and viruses, is worth the money.”

As they worked to build a legal platform, the Anghami team essentially enacted a coup in the regional music business, securing an exclusive contract with Rotana that ensures that major Arab artists from Haifa Wehbe to Fairouz can only be accessed on their platform for the next three years.

“If anyone wants to come into the market, they won’t have access to this content,” says Audi. Previous rival site Yala Music had previously licensed Rotana’s content, but not entered an exclusive agreement. If Spotify itself (whose Director of International Growth said that Spotify would rather enter the market and compete than acquire) entered the market, it would face the same issue.

While going the legal route and securing additional contracts with Mazzika, Melody, Warner, Sony Music, and EMI has cost the creators a pretty licensing fee, it ensures not only that they can dominate the B2C market, but also that they will also be able to offer B2B services by partnering with local telecom companies to offer Anghami discounts to subscribers.

Anghami’s biggest strength is clearly its exclusive access to titles, but that access might not mean much to users without a sleek interface that makes browsing easy.

The app is packed with goodies (check out the screenshots below). It makes it easy for users to swipe through playlists of music, toggle between international and regional music, like and share songs and playlists on Facebook and Twitter, subscribe to individual artists, listen to pre-made playlists, see music trending in their networks, and also discover new music with a “Surprise Me!” option, represented by a little genie lamp, that smartly predicts user preferences based on activity and likes.

This last bit- the ability to discover new music- seems one of Anghami’s valuable aspects. While the “international” category right now is limited to major label artists, Anghami intends to branch into more independent labels eventually. Either way, the option to continually discover music that you might like, while having control over it, on your mobile, is at the crux of what makes platforms like Spotify and Anghami more compelling than music stations like Pandora.

The hunt for new music is an elusive art; finding a few new excellent songs would be worth $5 to this listener.

The only concern one might have is that all of your listening is public to friends that you add on Anghami- there’s no way to listen that one really cheesy song you don’t want to admit you want to hear. The platform also needs a listing of songs by genre.

Choosing a Startup over Big Labels

The launch of the region’s Spotify isn’t just another mobile app. Its founders Elie Habib and Eddy Maroun were able to build a company that lured Audi away from taking a job with EMI.

After graduating from Harvard Business School last June, Audi briefly considered a job at the major music label. “They wanted me to be their Director of Digital Business Development, to work with tech companies on music streaming.”

His classmate who ended up taking the job saw the Anghami on the table and realized that Audi would rather be an early employee at hot emerging market startup than receive corporate benefits. “Instead of getting free tickets to all of my favorite shows, I decided to join a startup,” he smiles.

Audi is no stranger to musical performances himself. “I once sang at Music Hall,” he casually confesses as we’re discussing Anghami over coffee. “What?” I blink.

Well, ok- he entered the Lebanese karaoke championship, and reached the finals at Music Hall. “There were three rounds, two at Mandaloun first, and then the final 10 sang at Music Hall,” he recalls.

He didn’t win, but he’s found the right place to merge his love of business with music. “Elie is an amazing tech guru, and Eddy knows just about everyone in the music business,” he says. Add to that a team of talented developers that can pull together a mobile app that turns your phone into a band instrument in 24 hours at Startup Weekend Beirut, and a total of $1 million in funding from MEVP, and you have a hit in the making.

Stay tuned for more updates- the founders have promised more features,  apps for Android, Blackberry and Nokia, and the announcement of major B2B deals soon. 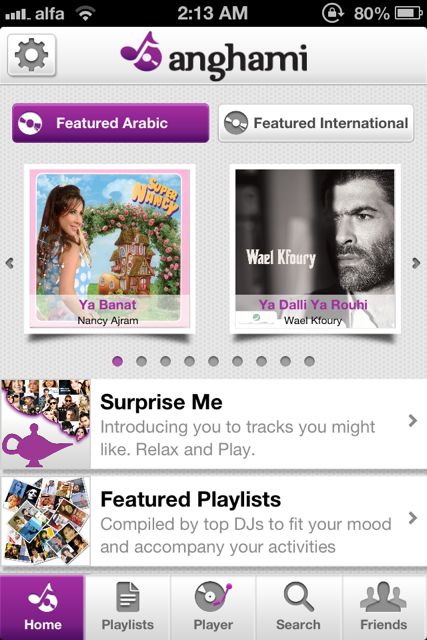 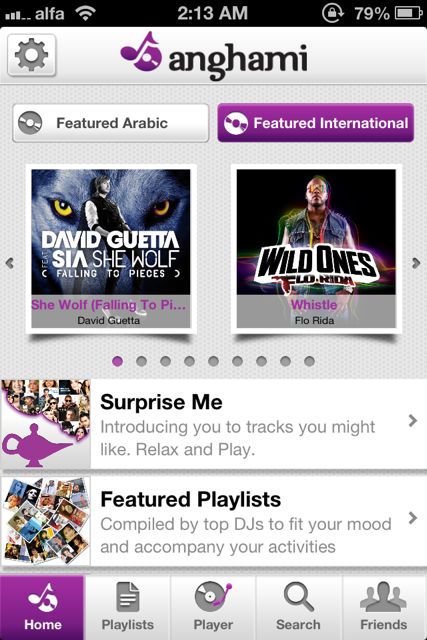 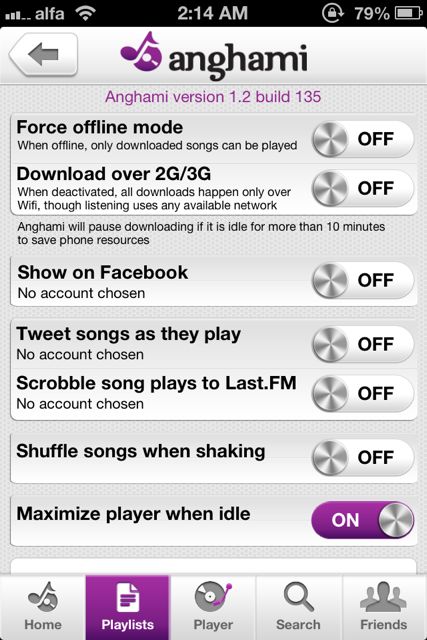 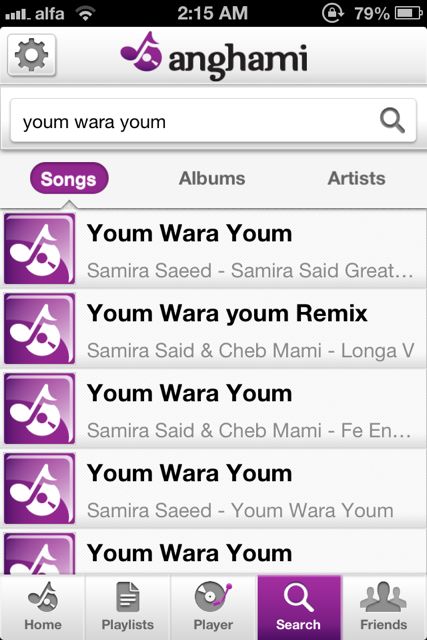 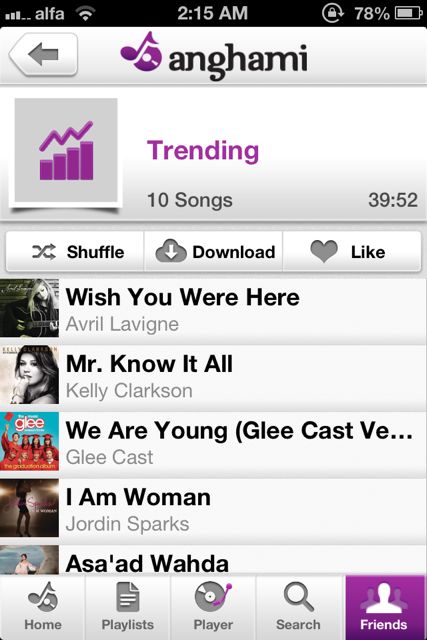 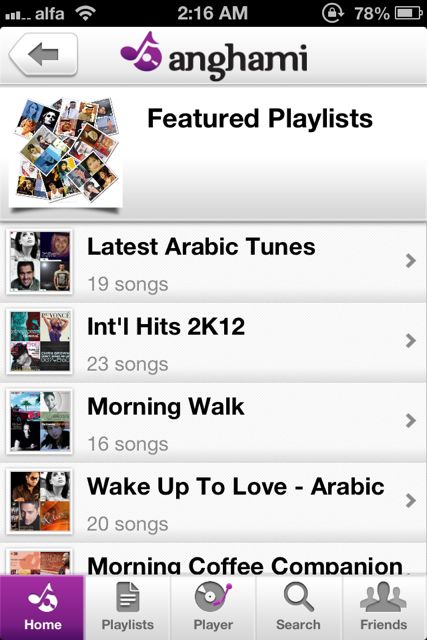