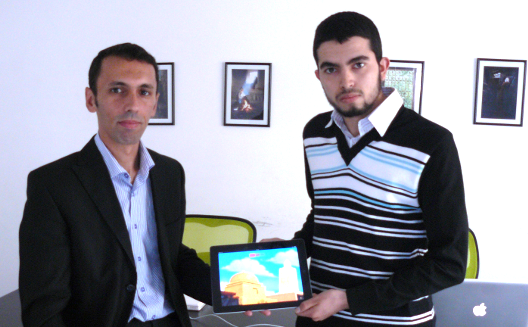 Among the few mobile app companies based here, one in particular recently attracted my attention. It’s called “Masarat App,” a mobile startup launched by four founder based in Temara near Rabat, Morocco. Created one year ago in 2011 by Moroccan entrepreneur Amine Belouali, along with co-founder Yahya El Mir, Masarat App designs and develops Arabic and Islamic mobile applications. It has already to its credit two main mobile and successful applications, “The iQetab of Fatima Al Fihria” and “Salatuk.”

iQetab of Fatima Al Fihria is an interactive children’s book for iPad about the childhood of the Moroccan hero Fatima Al Fihria, the founder of the oldest university in the world, Al-Qarawiyyin located in Fez, Morocco. The app, which launched this Ramadan, comes in Arabic, English, and French, with native voiceovers, a dictionary and a few interactive games included coloring games and puzzles, similar to the stories launched by Sacha Books in Egypt.

“Thanks to iQetab, Children will learn more about our local heroes,” says Belouali. Children can listen to the story, learn new vocabulary, play games and also share their coloring books on social networks. After launch, it quickly rose on iOS charts, ranking #1 in 6 iPad App Stores in the MENA region (Egypt, Jordan, Kuwait, Oman, Saudi Arabia, UAE) and #9 in the US App Store, in the Free Books category, with an average rating on App Store of 4.5 out of 5.

As a powerful interactive mobile engine that allows producing quickly interactive books combining multimedia elements, iQetab is one of the innovative products of Masarat App. It’s also perfect for writers of children's books for example who would like to promote their works across the MENA region.

Thanks to Salatuk, you’ll have the prayer timing, locations of mosques near you and the Qibla direction. The Salatuk app algorithm supports calculation methods adopted by many Muslim countries, choosing the appropriate calculation method basde on the location of the mobile user. With more than 20,000 downloads per month and an average rating on Google Play of 4.8 out of 5, Salatuk has proven to be a fledgling success.

This double success has allowed Masarat App to think about the next chapters. “We’re planning to launch new iQetabs in the coming month, about other famous Arab heroes like Ibn Battuta, Ibn al Haytham or Omar ibn Abdul Aziz.” confirms Amine Belouali. The company’s new apps will be supported by the recent round of 1 million MAD (US $111,000) in funding that it raises from new finance vehicle INTILAK at the Centre Marocain de l’Innovation (CMI), a Moroccan governmental initiative that encourages innovation and research and development.

The success of the two apps also demonstrated to Masarat (a team of 4) that there’s a tangible shortage of mobile applications related to Arabic Islamic culture in the Moroccan and broader regional market, at least from their perspective. “We’re looking for partners and investors in the region to help us grow quickly” proudly insists Amine.

I personally installed and tested each of these two applications, and I admit I was pleasantly surprised by their quality, their originality and their innovative features. Masarat App and its apps to come certainly promise to be talked about in the coming months in the region.

Interview of Amine Belouali, co-founder of Masarat App from Karim Jazouani on Vimeo.