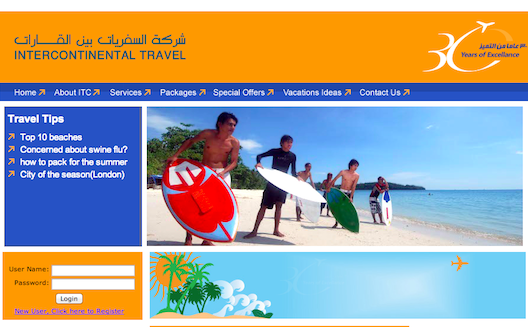 Intercontinental Travel Company (ITC) is one of the leading travel agencies in the Middle East and one of the pioneering companies in the travel industry in Saudi Arabia. Launched in 1979, ITC was one of the first Saudi agencies to receive IATA accreditation in 1980, and was later chosen by Lufthansa in 2000 to be their first LCC (Lufthansa City Center) office in Saudi Arabia.

Yet this success did not come without challenges. A rapidly changing industry and some poor management decision almost took the company to bankruptcy at one point, yet one man stepped in and transformed the company from a veteran, crumbling entity to an innovative, leading agency. Former banker Khaled AlFadhl acquired ITC in the mid 2000’s and quickly took the company online, embraced social media, and made his staff more agile to take the company to new levels of success.

Ranked #6 on Arabia500's 2010 Saudi Fast Growth 100 list, the company continues to expand along with the e-commerce market in Saudi Arabia, which is now valued at $520 million, with around 39% of adult Internet users in Saudi Arabia consistently buying products online, according to Arab Advisors Group. According to a study on the travel sector in Saudi Arabia, approximately 74% of internet users have used e-travel services at least once.

In a short podcast, listen to Alfadhl describe how he turned the company around, what differentiates it from competitors, and what critical concepts Saudi entrepreneurs should keep in mind when building companies.