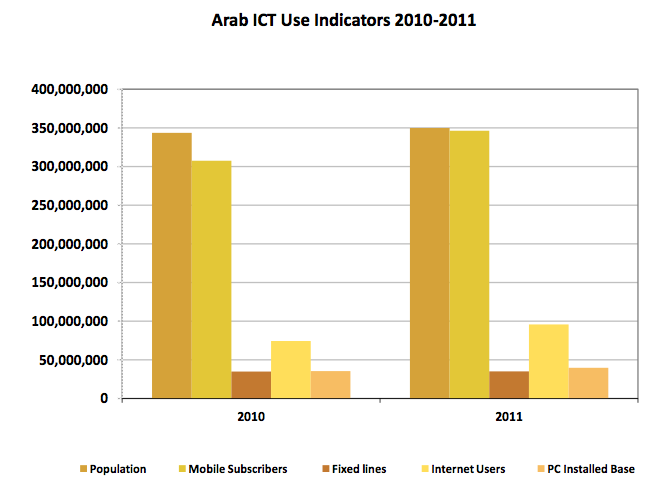 The Madar Research and Development Center, based in Dubai, recently released this report on Arab ICT Use and Social Network Adoption, sponsored by King Abdul Aziz City for Science and Technology (KACST).

The report analyzes growth rates and the spread of mobile phones, landlines, internet users, and computers in the Arab world. It covers 18 Arab countries, with sections dedicated to the adoption of social media networks in the Arab world and to the prevalence of digital Arabic content.

The report shows that the Middle East and North Africa has witnessed a dramatic growth in international internet bandwidth over the last year, with growth rates averaging 40%- with Syria leading the region in terms of growth at 184%, shortly before political turmoil swept the country.

When it comes to Arab ICT Use, Saudi Arabia topped the 2011 index with a score of 2.82. This position is mostly driven by its mobile penetration figure, 189.24%, ranking it first in the Arab region and fourth worldwide. Coming in second place, Qatar scored 2.78 on the Arab ICT Use Index, while the UAE came third with 2.59.

The report also lists Arab internet user growth in 2010-2011; Morocco leads with growth rate of 39.36%, followed by Sudan and Yemen.

In the second part of the report, highlighting Arab Social Network Adoption, Jordan ranks first in the MENA region in terms of penetration of Facebook users in relation to internet users with 90.85%. Tunisia comes in second with 81.54% penetration followed by Lebanon scoring 78.99%.

On Youtube, the number of Arabic videos had reached 1% of the wotrld total by end of 2011, which is about 6.5 million videos. And the dominence of music is apparent in the top ten most viewed Arabic Youtube videos.

The third part of the report focusing on Arabic digital content mentiones that 42% of all Web pages published in the region are in Arabic, with Saudi Arabia accounting for the largest number of Arabic content posts on the internet in the region (28.37%). The UAE comes in second (18.75%), and Morocco in third (8.23%).

Further statistics published in this report include the use of Wikipedia and blogging platforms in the Arab world, and the rise of citizen journalism. These findings are important to consider when entrepreneurs develop new startup ideas in the region and can shed light on the type of technologies that are most popular with consumers in the Arab world.