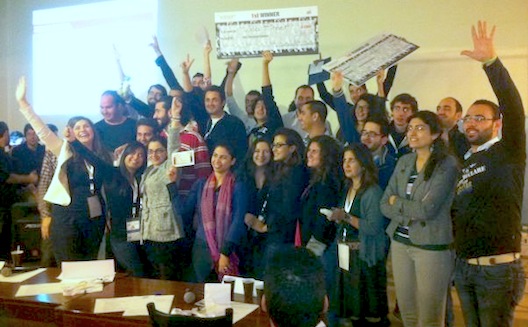 After a final round of 14 pitches, the Startup Weekend-style Beirut Social Innovation camp came to a close at AltCity last night, as judges awarded the winning spot to Job Pinner, an online location-based directory for offline workers.

“We didn’t believe it was going to happen,” said Jihad Kawas, grinning ear to ear as he wielded a large check for $1000, flanked by team members Dani Arnaout and Abdulrahman Mohsen. “But we’re really excited. We’ve starting building the app.”

The team won the crowd of 65 over with a playful skit demonstrating the value of the platform- it’s not a groundbreaking idea, but in a country like Lebanon where offline talent is often discovered by word of mouth, the value proposition was clear.  The judges (who included Joelle Yazbeck of MIT, Omar Christidis of Arabnet, Ziad Abichaker of Cedar Environmental, Sami Tueni of Naharnet and Rima Nakkash of the Health Sciences department at AUB) were mostly concerned that, with a $0.99 per month fee subscription model they weren’t charging enough. “Isn’t that a bit cheap? And you can charge the workers for advertising as well,” one said. 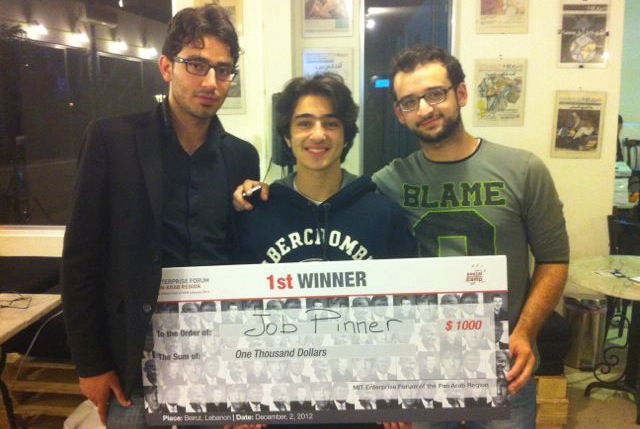 In second place, winning $500, was Touch Life, a platform enabling blind users to text on touch screens, by tapping Braille patterns for each letter. To give blind users feedback, the platform would speak typed words out loud.

TouchLife clearly met the event’s mandate to develop web and tablet-based solutions for social problems in Lebanon and the region, and the team showed a lot of passion for the subject and ability to whip together a great prototype. The only thing missing seemed to be deeper thought about the application’s fit with its userbase. Judge Omar Christidis made an excellent point: “How many of the blind users that you’re targeting know a written language?” It might be easier for users to draw each letter- in Latin or Arabic characters- than to type out a Braille pattern for each individual letter.

Given this reality, the team may shift the idea into the education realm. “Our goal is to educate blind children to learn Braille,” they said.

Another stumbling point was claiming that they would capture 100% of the available market of blind individuals online in the U.S. When judges advised that reaching 100% of your market is not a realistic assumption, and that their derived projection of $2.7 million in “profit” would not come even during the first year, the team insisted they were correct.

The two teams tied for third place were interesting- and perhaps controversial- ideas. The first, e4waste, was a hub for waste management stakeholders, connecting government entities, companies, and local neighborhoods in order to treat waste.

It ran into some difficulties with the revenue model- one idea was to help waste generators sell profitable elements of their waste (electronics, etc.), and take a commission. But if the parties could connect offline, this might be tricky; like some others, this one seemed best situated as an NGO.

Sniper Source, on the other hand, was a mobile app designed to determine the location of a gunshot by triangulating audio signals captured from people’s cell phones. Members of the population would download the app and turn it on for a certain amount of time per day (the creators said about and hour and a half, if they have at least 200,000 users), to give Sniper Source the amount of signal it needs to detect the location of any loud noise in Lebanon.

The technology already exists in Silicon Valley, and the team wants to localize it and train it to distinguish between the ubiquitous fireworks in Lebanon and hopefully less frequent gunshots. When it comes to monetization, the team said they could sell their services to the government.

I, for one, was skeptical. It didn’t make sense to me that members of the population would download an app that would record their activities during the day, even if they get to choose that time. This would take too much active use for an abstract pay-off. And if it’s connected to the government, I could see the population conceiving of it as a spying device; the app would have a huge PR hurdle.

All of the winners will have a chance to develop their ideas as they cash in their prizes, which include attendance at Arabnet, advertising from Naharnet, scholarships from Cisco, and marketing from Eastline Marketing.

Ideas to Keep in Mind

Many of the ideas presented- platforms for finding an apartment, giving NGOs exposure, comparing supermarket prices, or finding local repair shops or talent- fit local niches, but could have done better in a few regards:

1)   Some did not understand the value chain of the sector they were pitching in. If you’re dealing with supermarkets or talent scouts, it would make sense to add into the pitch an element about speaking to someone in the business about how it’s done now and how they could improve.

2)   Many relied too much on advertising or online commissions as a revenue model. Most of these were very niche portals that might not get the amount of traffic needed to truly make money from ads (see Khalid Aboujassoum’s advice at Startup Weekend Doha on this topic). Some also wanted to take a commission for deals or connections made online, but perhaps an offline service would make more sense for that.

3)   They needed more market research (also make it in Arabic). It’s unfair to criticize a startup weekend idea for not having the time for in-depth research, but it’s great if people can add into their pitches a plan for understanding the market rather than dismissing competitors or not even knowing about them. Or maybe just search their topic on Wamda- one handicraft seller had never heard of Ananasa or AlHoush.

The Most Scalable Idea?

The idea that perhaps might be the most successful venture to emerge from the weekend was not awarded, but its founders are taking it forward anyway. Zeina Sfeir and Elsa Aoun pitched Sohati, a medical portal along the lines of Altibbi or WebTeb, but focused a bit more on women. Having already built successful women’s portal Ounousa, their experience stood out.

Christidis called it his favorite. “Health content in particular is a very hot sector, and there’s no clear winner in the space. The ladies have a strong advantage in that they’ve already built a content business that has broken even- they’ve figured out the model. Being able to leverage the assets that they already have to their new business would be very powerful.”

Finally, the one startup that everyone agreed had to be created, but as an NGO, was Zeina Spoke, an online platform supporting survivors of childhood sexual abuse. Started as a blog, it allows them to speak out anonymously, via messages written on placards, and would offer services to help parents understand and protect their own children, as well as a safe, secure, anonymous place for survivors to connect and advice each other. With a great interface and needed service, it gained unanimous support from the community.