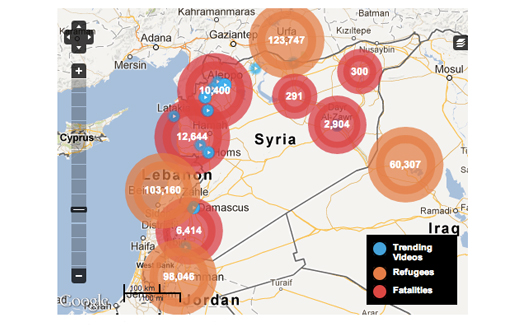 Far more complex than a simple revolution or call for reform, the conflict in Syria continues to fascinate and appall its witnesses, as its mangled bodies, haunted children, and increasing cast of dubious characters make for a grim cabaret that challenges the limits of a global audience’s ability to absorb, much less understand.

Whether seen as a free-for-all or a polarized proxy struggle that will define the balance of power in the region for decades to come, the story of Syria today challenges modern media to find an angle that can capture enough of the truth to satisfy.

In a climate of news ADD and hashtag obsession, one platform launched yesterday with a thoughtful answer to complexity. Syria Deeply promises to deliver on its name, offering an in-depth look at the conflict from all angles, with map-localized statistics, a description of relevant players, a web of their local allegiances, and blog-style firsthand accounts from Syria as well as daily written and audio perspectives and social media updates.

It has something for every attention span, but leans towards offering analysis and background; up to 75% of the site’s information is either automated or static content, which gives readers the “Syria files” they’ll need to decode daily news in context.

For Armenian-American founder Lara Setrakian, who has family in Syria and has worked in the Middle East for five years for American media outlets ABC News and Bloomberg Television, building the site over the past two and a half months was a personal calling. “To see the Syrian crisis so chronically misunderstood by an American audience was not acceptable. I couldn't see it and not do something about it.”

While the site began with a series of scribbles in her notebook, its focus on static content and expert perspective is data-driven. “A recent Pew Center study found that the number one reason that Americans don't follow more foreign news is a lack of background,” she says. “The American news cycle and education system simply doesn't deliver that.”

To fill that gap, she intends to make that background as easy to understand as possible, using data visualization techniques (shown in the site’s “Defection Tracker,” which monitors the status of Assad allies). 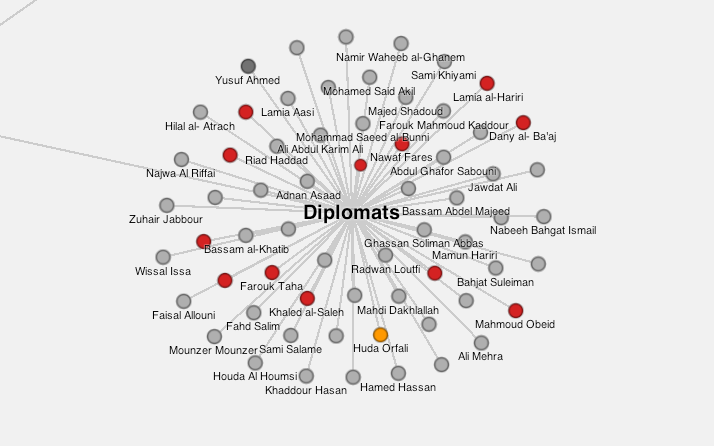 Another large asset of Syria Deeply is the team’s own expert knowledge. Its Twitter feed offers a curated list from trusted sources, speaking to Setrakian’s finding that social media news often leads mainstream outlets by 48 hours. The op-ed section offers analysis from leading thinkers in the field.

This combination of political depth and technological vision reflects Syria Deeply’s diverse set of partners, who include the World Policy Institute, a non-profit think tank based in New York, Google+, presentation platform Prezi, Soundcloud, State.com, and mapping platform Ushahidi. With an arsenal of new media tools at its disposal and a focus on user experience (UX), “we’re going to get incredibly good at portraying complexity,” says Setrakian. “How can you design something for maximum comprehension?”

Beneath its expert coverage of a global crisis, the ability to cover a complex issue well is the core value of Syria Deeply, and one that Setrakian and her team of eight hope to scale. “As we get better at depicting nuance, we hope to scale to cover a range of issues, and we plan to license the framework,” she says.

This also means that the site won’t be a slave to traffic when it comes to picking and choosing which sections to expand or shrink. While Setrakian sees the site as a testing ground for new media storytelling, building a proprietary software solution will allow Syria Deeply itself will stay true to its goal of “conveying the most relevant and essential information in a way that makes the issue the most digestible,” she says. “We’re in news R&D. Eventually the platform could be used to cover a range of complex global issues from Congo to North Korea, from climate change to food security.”

Syria Deeply will also be partnering with the National Council for Social Studies to turn its information into lesson plans in classrooms. The company is now closing a round of seed funding with investors in both the Middle East and North America, while also launching a public fundraising campaign on IndieGogo.

With predominantly U.S.-based partners, one can tell that the site currently has access to a viewpoint that is not unsympathetic to U.S. interests. But the site’s goal is to remain neutral; this current bias in the coverage is an access bias rather than an editorial one, says Setrakian. “It’s harder to find stories that are sympathetic to the Syrian regime. We also want to bring in Russian and Chinese perspectives.”

It’s going to take time before the site has a full spectrum, she says, but the founders are committed to covering the conflict as a humanitarian issue while presenting even coverage- “it is incumbent upon us to include more voices.”

While it’s now in its infancy, it’s clear that attention and activity on the site is set to skyrocket thanks to a voracious local and global appetite for dialogue about a conflict that won’t end. A platform that can offer depth and accuracy, says Setrakian, is “an idea who time has come.”