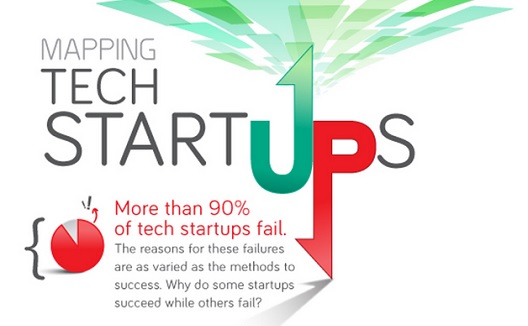 A recent study by Allmand Law found that more than 90% of all tech startups fail. It’s a bleak statistic, but let’s take a look at why.

The below infographic presents a few big names in the tech industry and why they either succeeded or failed, offering some important lessons for tech startups across the Arab world.

After injecting $33.5 million into the platform and launching with celebrity endorsements, Napster creators Sean Parker and Sean Fanning built very high expectations for Airtime, which pairs users in random video chats based on areas of interest. Yet it never took off, likely due to user confusion about what exactly its added value was, and privacy concerns- staff monitored video chats to make sure no inappropriate behavior was on display.

MySpace and Friendster, other noted failures in the infographic, failed to evolve with its users' changing needs. While people sometimes complain about changes to Facebook’s design and interface, the platform does a good job at iterating to keep things fresh for users. Friendster and Myspace did not.

In the Arab world, we see that the market is often a bit harsher; MySpace and Friendster were able to linger for years with little development. Jordanian gaming startup Wizards Productions, on the other hand, had a hard time recovering after altering one of its games. After gaining a large band of loyal followers for their game Arabianhitman, founder Sohabi Thiab recently revealed, the company decided to completely rework the game, adding functionalities that users ultimately didn't need.

Here, however, startups can also fold for reasons that have nothing to do with market fit. TakTek Games, also from Jordan, was forced to close its doors due to a drain of its developers to other markets. Wildly popular Wheels Express, on the other hand, closed last October, apparently because its plan to scale quickly lowered its revenue margin at a critical juncture, scaring off conservative investors.

These are just the ones that seemed to garner initial success; however, many smaller startups have failed simply due to a lack of traction.

When it comes to successes, this infographic reveals insights that also apply to this region. Shopkick, rated the 4th most widely used shopping app in 2012, has capitalized on the continual spread of smartphone use by making their mobile loyalty program an essential part of their users’ shopping experience. In Cairo, Zoboon is hoping to do the same by focusing on mobile loyalty benefits.

Zynga is listed as a success as well, pointing to their ability to capitalize on Facebook’s platform with simple multiplayer social games, like Poker and Farmville. But not so fast- the company recently had to close down 11 gaming titles, and are now moving towards mobile. With Google’s recent report that the UAE and Saudi Arabia each have the world’s highest smartphone penetration rates, at 62% and 60% respectively, there is a lot of potential for continued mobile development in the region.

Know your customer. Go mobile. Be careful. Hang on to your developers.

Check out the infographic below and let us know in the comments why you think some tech startups in the Arab world have had to close down while others are succeeding.