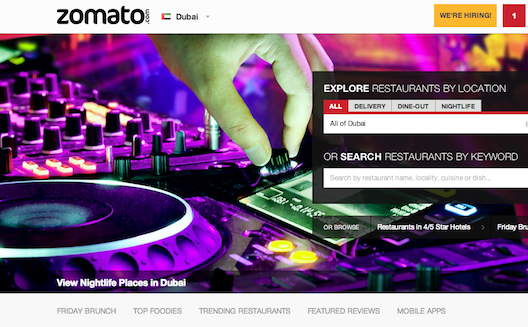 India's market of over 1 billion has been enough to sustain most of its tech startups, including success story FlipKart, the online book retailer that has now raisde over $180 million in funding and is set to reach $10 billion in sales by 2014.

Yet an increasing number are finding their way to the lucrative Gulf market. One of the latest is Zomato, a restaurant and nightclub review portal with a sleeker interface than U.S.-based Yelp.

Since its launch in New Delhi in July 2008, the site has gained over 82.1 million users. Six months ago, the site's founders set their sights on the UAE for their first international expansion.

“Wherever we see a good English speaking market with an opportunity both on the user as on the merchant site, we jump onto it,” explains co-founder Pankaj Chaddah.

In the UAE, his only competition were sites like Time Out, Fodor’s, and the Explorer- none of which are interactive. User-generated review website YaDig is its closest competitor, but, with 250,000 viewers per month and gaining, Zomato could be on track to take over.

To differentiate from its competitors, the site is focusing on three things:

With these strategies, the team has kept its branding consistent, not changing any of the looks, features, and functionalities for their Dubai site (although they did add a shisha feature).

Even though Chaddah believes that picking the UAE was the right move, it hasn’t been that easy to implement. The hardest part of expanding in any country, he says, is determining the local regulatory structure. Fortunately, this will get easier each time they expand.

Another challenge has been the talent pool. “Don’t be afraid to bring in talents from abroad,” he advises. For its launch in Dubai, in fact, Chaddah hired directly from Scotland and the U.S.

Zomato now has big plans for 2013: it unveiled a Qatari version a month ago, launched a Philippines version today, and plans to launch soon in South Africa, England, Turkey, Brazil, South Africa, Kuwait, and Lebanon. Once they will have expanded to those developing countries, they intend to measure themselves against Yelp in the U.S.

Perhaps, by staying focused on an excellent interface, they might be able to claw some market share from Yelp, but Yelp also offers very simple divisions by category on the homepage, and has expanded far beyond restaurants. For now, the race is on with YaDig in the UAE for the top review site.