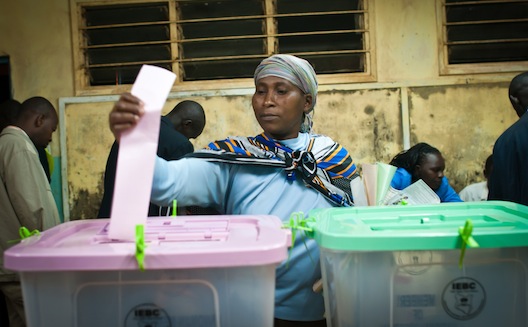 Last week, Kenya hit the polls to elect the country’s 4th president since its independence 50 years ago.

The turnout in Africa’s so-called Silicon Savannah was stunning- an unprecedented 86% of the 14.3 million registered voters waited hours- in some cases up to nine or ten hours- in the blazing sun, to cast their ballot.

When the dust settled after nearly a week of manual counting, Uhuru Kenyatta, one of Kenya’s richest businessmen, son of Kenya’s founding president, and a man who is standing trial at the International Criminal Court for ‘crimes against humanity’ allegedly orchestrated in Kenya’s last election, squeezed a narrow victory. Incredibly narrow: just .07%, or around 8,000 votes, over the 50% threshold needed to secure a first round win.

Politics aside, the other major contender in the elections was technology. Kenya is Africa’s rising tech star, thanks in part to the launch of crowdmapping platform Ushahidi in 2007, which helped citizen monitor post-election violence. This time, however, tech almost spoiled the whole thing.

The Electronic Web of Voting

Kenya’s last general election in 2007 was rife with ballot stuffing, an estimated 2 million “dead voters”, and a complete lack of transparency, which sparked widespread tribal violence that left over 1,000 people dead and half a million displaced.

This year, however, technology was brought in to prevent corruption. Biometric voter registration kits with electronic thumb pads were used to register 14 million voters, and laptops at every polling station on March 4th were to be used to confirm voter identities.

The country’s 33,000 polling stations had smart phones equipped with apps designed to allow provisional results to be sent directly to the National Tallying Center in Nairobi, in real time. The idea was that results would then be broadcast by the Independent Electoral and Boundaries Commission (IEBC) via an API online, allowing TV stations to display up-to-date results as they came in.

Sounds great, right? Transparency and  accountability: all the ingredients for a great election.

Yet Gregory Warner of NPR put it best: “Ambitious? Of course. Only 23 percent of the country has access to electricity.”

When the elections actually began, laptops ran out of battery. Biometric Voter Registration kits began to crash. Paper ballots and registration checks were brought out, backing up lines.

But that wasn’t all.

As the votes rolled in Monday night, the IEBC’s data servers became overloaded. According to IEBC officials, the disk space wasn’t partitioned properly before elections, leaving some votes lingering in servers around the world. The live updates promptly stopped, causing widespread anxiety and confusion among the public.

Then, a weird computer bug began multiplying “spoilt votes” by a factor of 8. These were votes that were illegible, placed in the wrong box, or had more than one candidate selected and thus were disqualified. All of a sudden, voters thought that nearly a quarter of the votes would be thrown away.

The end result of this incredible #techfail? Africa’s "Silicon Savannah" reverted entirely to manual tallying, abandoning the tech stuff all together and flying the final tallies in by choppers from across the country.

For a week, Kenya held its breath. And, admirably, its peace.

Where the government and IEBC’s technologies failed, Uchaguzi succeeded.

A citizen-report crowdsourcing and crowmapping platform powered by Ushahidi, Uchaguzi had teams across the globe working around the clock to  track and verify reports via SMS, Twitter, and email on the elections, from instances of violence and voting issues to simple reports of peace.

The results were impressive.

And, perhaps the best reflection of the elections, there were an astounding 751 reports indicating “positive events”, like police promoting peace.

Here are some of the reports:

And acts of peace:

Lastly, of course, was the incredible power (and wit) of #KOT, or Kenyans on Twitter.

Here are some of the more comical ones.

Even Somali terrorist network Al Shabaab decided to throw some skin in the game.

There was enormous backlash against foreign reporters, who the twitter community blasted for supposedly “looking for trouble.”

And those of pride… even if it was from an expat.

Kenya’s election is not over yet. Uhuru Kenyatta’s main opponent, Prime Minister Raila Odinga, is currently challenging the IEBC’s decision in Kenyan courts, and if irregularities are found, it is possible that the elections could be held again, or the two leaders could face a runoff.

What’s the lesson in all this? While the high-tech component of Kenya’s elections seemed to fail, it still had an enormous role to play in other aspects: in keeping the peace, keeping the conversation light, and informing millions of citizens in real-time exactly what was happening during the “tallying blackout.” The Silicon Savannah may have run into a roadblock, but it hasn’t, by any means, been derailed.