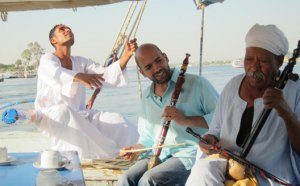 Typically we think of entrepreneurship as the creation of new businesses, but working to change public opinion could be called cultural entrepreneurship, a service not directly related to a product or a service but to the way people see each other and how they look for ways to change their reality.

For that reason, in August 2011, Egyptian ethnomusicologist Mina Gerges and Ethiopian-American singer Meklit Hadero founded The Nile Project, a cross-cultural musical dialogue tha evokes the African river as a symbol of the common ecosystem uniting the Nile Basin countries.

The goal is to raise awareness about recent political conflict over the waters of the Nile River.

"We need cultural awareness about the conflicts over Nile water distribution, which has been ongoing for several years without any political solution," says Gerges. "The relationship between Egypt and Africa isn't clear; we still think that we aren't an African country. We have to start changing this perception."

While there's a historical lack of cultural relation between the 11 Nile basin countries (Democratic Republic of Congo, Burundi, Rwanda, Uganda, Tanzania, Kenya, Ethiopia, Eritrea, South Sudan, Sudan and finally Egypt), in which 400 million people share the second longest river in the world, Gerges and Hadero hope to engage their neighbors and change behavior, with music. 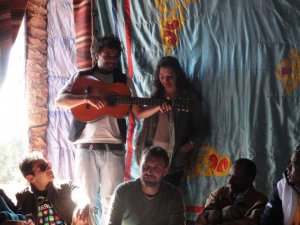 Mid-February, the co-founders of the Nile project gathered 20 musicians from Egypt, Sudan, Nuba (both from Egypt and Sudan), South Sudan, Eritrea, Ethiopia and Uganda, and brought them to Aswan to perform songs about the Nile, poverty, peace, love and war, in order to spread their art among their neighbors.

As the musicians formed groups and composed new songs, they worked to unit the Nile basin culturally and musically, playing "Nile compositions" combining different styles and instruments from across East Africa.

While political problems still appear every now and then, Mina considers music a way to solve all disputes. It can be difficult to draw the public attention when internal political conflicts persist and everyday concerns could limit the desired impact.

But, by building a  network of consultants and specialists in politics, education, music and social entrepreneurship, Gerges is working to create individual messages adapted to the public in each of these 11 countries, speaking directly to their interests.

Initially, Gerges developed the idea for the project came after attending an Ethiopian music concert in San Francisco; it seemed ridiculous to him that he had traveled all the way to the U.S. to hear Ethiopian music, and never listens to it in Egypt, despite the fact that both countries are geographically close.

In keeping with the goal of uniting the region, the Nile Project plans to organize a Nile tour in 2014, in which musicians and environmental educators will sail down the river from the Mediterranean to Aswan in 35 days, on a boat made of recycled water bottles. Along the way, they will perform concerts and give workshops to teach the local public about the Nile's cultural and environmental fabric. This tour will be accompanied by the launch of a web-based dialogue platform for sharing ideas and Nile stories via live discussions and short videos.

In the future, Gerges is also planning a Nile festival in Washington, D.C. in summer 2016, and the creation of a multidisciplinary  curriculum for children exploring culture, history, and geography and encouraging small social projects.

The Nile Project, says Gerges, works as the "missing link" between culture and development since these projects often lack a cultural dimension. By uniting the two, he hopes "cultural entrepreneurship" will take off.