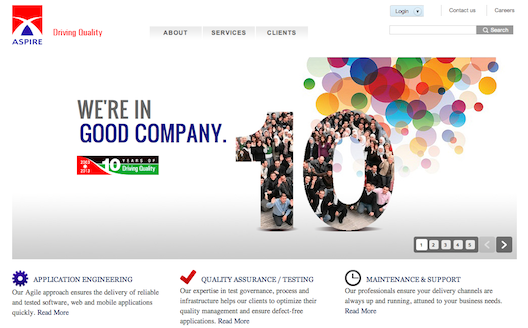 The fact that you haven’t heard of Aspire.jo isn’t an accident. “I’ve kept the company very low profile,” says founder and CEO Kaushal Shah, who started the offshore IT company in Jordan in 2002. Over the past 10 years, Shah, originally from India, has quietly built the company into a multi-million dollar web services business that now employs 450 local Jordanians and serves one of the most famous global weight loss companies in the world, as well as a U.S.- based flash sales pioneer, and leading online travel companies and global digital media and PR firms.

It hasn't been easy, however; the challenges he has transcended reveal what’s tough about getting started in Jordan. The country boasts over 10,000 IT graduates a year, and yet tech companies still find a lack of talent. Once they train local talent, developers and designers often leave for higher salaries in the Gulf (Ghaith Kawar of TakTek will be the first to tell you how impossible it is to stop that trend).

Shah makes no secret about the fact that his success in being able to train talent to perform in a range of fields, from quality assurance to mobile app development, depends upon building a culture that keeps hires happy, especially women. In a country where only around 14% of women participate in the formal workforce, 180 of his employees- 40%- are local women, who he offers a year of maternity leave.

When they return, they enter a family-friendly atmosphere. “One of our team leads had a child a few years ago, and she called me up at one point to say, ‘I can’t just stay home all day,’” he recalls. “We created a room where she could bring the baby when she came to work.”

The first question that one might have for him is, why Jordan? Why come all the way from India to set up an outsourcing company in a even more nascent market?

To hear Shah tell it, Jordan simply offered the right environment at the right time. From his sunny office in Amman, he describes his journey with a dose of humility and a lot of humor. The moral of the story? Building an empire takes time, and dedication to structure, but 10 years of hard work will get you somewhere.

Here are his tips:

1. Create a scalable system from the beginning

“I stumbled into the IT industry in 2000,” says Shah. “For the previous 10 years, I had worked for a marine construction company in Qatar. As I handled their HR and finance and accounting, I had an Italian boss who was hardworking, diligent, and tough, and he exposed me to every element of the business. When he took me along to the next project, I shadowed him and learned his management style."

The most crucial element was, he says, learning that "everything that occurs more than 3-4 times has to have a process.” When he set up Aspire, he decided to run the company as a corporation from day one, “I made everything process-oriented,” he says. “Mistakes are bound to happen, but at the end of the day, you have to lay the foundation if you want to scale it.”

“If you’re a small outsourcing company in India, you get the leftovers,” says Shah. At the time, when he first came to Amman, in 2002, bigger companies, with over 5000 employees, were snatching up most of the international business in India, he recalls.

Shah first came to Jordan to be with his wife, who is Jordanian, but he quickly found it to be a better location for small services companies than the glutted market in India. “We were a bigger fish in a smaller pond,” he says.

What’s more, companies in India had become overconfident, he says, telling companies what they needed instead of listening. When he came to Jordan, and built a local team, Aspire was able to carve out a reputation for exceeding client expectations. “Once they trust you, they want to stick with you,” he points out.

3. When you get an opportunity, think on your feet

“Everybody gets one break in life, right?” says Shah. “If you don’t grab it, you won’t get it again.”

His break came early on, when one of his connections reached out to ask for some QA Testing work for a very large global client. “Sure, I can do that,” he recalls saying immediately. “But I had no experience in it. I researched QA Testing that night, and found a bug in the client’s Hong Kong website.” The client then asked if he could start in a week.

“I said give me two weeks- I didn’t even have a computer.” Shah recruited a female colleague from India with experience in QA Testing and flew her to Jordan, and then hired a local Jordanian woman who did graphic design; his wife chipped in as well. With a fledgling team, he bought two second-hand PCs and rented a Mac for two weeks for 200 JD (~ US $280).

That particular client had a previous bad experience with an Indian company, but Shah’s makeshift team was able to reverse their stereotype by executing and closely follow the company’s processes, he says. Shah also knew that an opportunity like this might not come again. “I told them, ‘We are dedicated to you,’ and we had a gentleman’s agreement that we would not look for other clients for five years. We built teams out of nothing to serve what they needed.”

“Sometimes I call us an HR company, not an IT company, because we build teams,” says Shah. “IT work literally can be done from anywhere, if you have the right people, engineers, and graduates, that's all it requires; the right leadership and exposure.”

To keep the company growing, he put a training strategy into place. “People are going to move to Saudi. They are going to get poached,” he admits. “And you can't just pay more, because you're going to price yourself out. But there are a lot of things that we do internally to manage that.”

His internal mentorship program ensures that fresh hires are always learning. “New hires shadow our existing talent so that there is continuous knowledge transfer,” he describes. “Most fresh grads don’t know what they want, allow them to move among departments. It’s continuous live training, and the positive vibes create loyalty.

Now, the company is taking the same internal approach to its senior leadership. “We tried to hire senior management, and it just didn’t work,” he says. “All of our teams are organically grown.”

Shah has pointedly hired Jordanians, because it has made the most sense for his company. He’s also brought in a few key staff from other cultural backgrounds. “I created a mandate for hiring foreigners, to embed them into the team,” he says. “It’s healthy to have people from other cultures.”

He hopes that Jordan will continue to welcome foreigners. “I think Jordan is just waking up,” he says. “I’ve seen a lot of expat white collar workers, especially from India, coming into Jordan, and I think that if the country encourages that, they have a lot to benefit from.”

Changes to the immigration laws will help create more success stories like Aspire. “They might need to consider that the foreign companies that have come here have grown and created more new jobs for locals. It’s a win-win.”