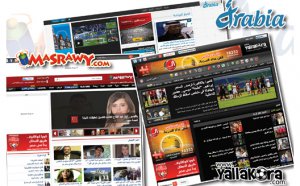 Until 2002, LINKonLINE was an online publishing section of Link Dot Net. Since it became an independent company, it has undoubtedly become a true success story in the online content industry and management in Egypt, now boasting 12 websites, employing 70 people and reaching 10.5 million users, or one third of the Egyptian audience on the internet.

LINKonLINE has also proved its resilience in the face the complex political situation in Egypt; iterating its business model has kept it ahead in the online content market.

“The advertising market has been affected by ongoing Friday demonstrations, which caused several Thursday evening campaigns to be cancelled, especially in 2011,” explains Moustafa Kamel, the executive director of LINKonLINE.

Initially, advertising revenues comprised 50% of the annual profits. After the Egyptian revolution, LINKonLINE began focusing on other revenue streams that now make up 60% of the company's profits.

To generate traffic in an uncertain time the team focused on delivering the right news. “If a topic attracts lots of visits, we give it more interest, follow-up and publish other related topics.” Kamel explains.

LINKonLINE's site Masrawy was awarded the 2012 Forbes Middle East prize for Most Influential Independent News website of the year, thanks to its lifetime reach of over 200 million visits.

Yet when Masrawy became more popular than its sports portal YallaKora, after the Egyptian league was suspended in the wake of the Port Said massacre, the company's team began to rethink their ad model and focus on four other revenue models:

The platform plans to expand into the UAE, and Saudi Arabia this year, and has determined that another good revenue stream is B2B; the companyrented one of its programming designs to Qatar to organize the Football World Cup ticket sales in 2015. The company is also training the team that will be handling the rented platforms to make sure they know how to use it.

Kamel summarizes the key success of Link Online in three pieces of advice: hire skilled people and develop partnerships, work on scalability, and innovate your business model. It is now expanding to other Arab countries such as Saudi Arabia and UAE.

Masrawy is looking for a regional expansion and for the launch of a new platform version within few weeks. However, the most important development concerns YallaKora website. Its design is being developed to recognize users’ preferences and show content that suits the user’s interests and desires. This also applies to the “important news” section that includes topics related to the user. In addition to that, the company is developing a program that determines the visitor’s location to provide localized news.