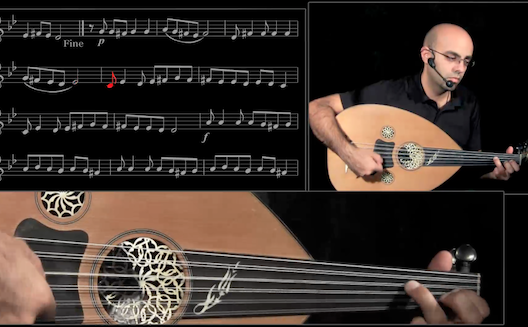 Correction: We received an update that I3zif may not be launching an e-store.

After struggling to learn how to play the guitar in Jordan, and finding courses too expensive, Bisher Abu Taleb, who's been a musician for 15 years now decided to take things into his own hands and bring music teachers to the home of everyone, by launching I3zif.com, an Arabic online platform that offers video instruction on playing musical instruments.

To make it accessible, he focused on offering instruction that didn't necessitate knowing how to read music. "You don't really need to learn music theory, you just need to know the chords," he says. Currently, the site offers courses for guitar, oud, piano and oriental drum, in Arabic, Oud and Tableh in English, and will soon add kanun, electric guitar and violin soon.

I3zif (pronounced ah-zif) offers 3 to 4 free lessons before the student starts paying, and it tries to make all sessions as interactive as it can, despite the fact that lessons are pre-recorded. In the videos, instructors, who are chosen for their ease of instruction over video, address mistakes commonly made by students. Students are also encouraged to film themselves while playing the instrument, and send a copy to the instructors, who will send feedback.

I3zif also offers a closed Facebook group where students and instructors can interact, and, after their third round of funding, will build software that listens to the music played by the students, rates it, and gives them feedback, while the instructors themselves take a percentage for each lesson.

The platform may be basic, but its appeal is broad. Not long after it joined Oasis500 in March 2012 and launched its beta version, angel investor Fadi Ghandour became interested. After seeing Abu Taleb's presentation in a mentorship session, he pulled the team aside and asked if he could invest.

"He just said, 'Hi, I love what you do, and I want to invest,'" recalls Abu Taleb. In June 2012, MENA Venture Investments invested in I3zif. The follow-on round to Oasis500's seed investment allowed the startup to buy the cameras and computers they would need to edit and produce videos, rent studio space, and launch an online advertising campaign.

Saudi Arabia registered the highest numbers of users, due to its lack of music schools, says Abu Taleb. They also catered to members of the Arab diaspora who were interested in playing instruments originally from the Middle East.

Having received many requests from students for advice on buying instruments, the I3zif team decided to start an e-store for musical instruments, that will launch within the next year.

"An e-store will allow us to leverage our credibility as a music school, and recommend instruments that complement the courses we give," says Abu Taleb.

Rather than compete with fellow Oasis500 startup Feesheh, which already offers a e-store for musical instruments, I3zif is partnering to recommend some of Feesheh's instruments, and planning joint projects.

After confronting challenges like online payment, finding video editors with a musical background, and helping professional instructors overcome their fear of the camera, the startup is partnering with Madrasati to launch I3zif in public schools in Jordan.