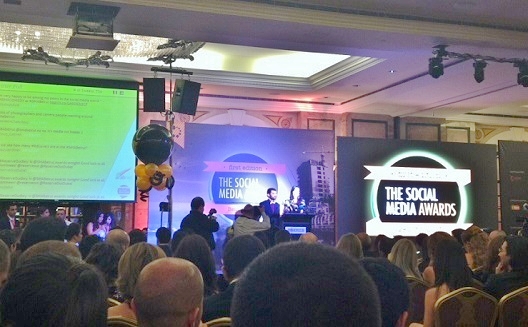 “The most powerful weapon in the Middle East is not sarin gas or nuclear weapons, it’s your smartphone,” asserted Britain’s Ambassador to Lebanon, Thomas Fletcher, at the start of last night’s award ceremony for the first Social Media Awards Beirut.

The star-studded event, organized by The Online Collaborative, brought the competition to a close yesterday at the glamorous Phoenicia Hotel, where individuals, brands, and blogs across Lebanon were honored for their engagement on social media.

Finalists were nominated by the public and announced at a press conference on March 27th in 32 categories including Best Fashion Blog, Most Engaging Politician/Diplomat on Twitter, Best Food Blog, and Best NGO/Community on Social Media. Public voting over the past month accounted for 50% of the scores, while judging by social media personalities and experts in Lebanon comprised the other 50%, and finalized the decisions announced last night.

Although competition judge and Lebanese Telecoms Minister Nicolas Sehnaoui couldn’t attend the ceremony, he joined via recorded message from Silicon Valley telling the packed crowd, “You can change the world and you can change Lebanon too.”

Ambassador Fletcher also took the stage, joking, “This is the first election in Lebanon for some time where the winner wasn’t known in advance,” garnering more than a little uncomfortable laughter from the crowd.

Some of the winners included Lebanon’s former Interior Minister Ziad Baroud as Most Engaging Politician/Diplomat on Twitter, Tickle My Brain for Best Startup on Social Media, singer Haifa Wehbe as Most Engaging Celebrity on Twitter, and amusing Facebook cartoon series Lebanese Memes for Best Facebook Campaign/Page. And Wamda was even honored as Best Business Blog in Lebanon.

Ultimately, the competition is a chance to recognize the important contributions of Lebanon's startups to building a vibrant online community and spurring economic development in a country with a notoriously poor tech infrastructure. It also shows the importance of social media to a very politically aware and engaged Lebanese population. Ex-Minister Baroud summed it up simply when accepting his award, “If you’re not virtual, you’re not real, even in politics.”