Qatar is the most competitive economy in the Arab region according to the the Arab World Competitiveness Report 2013, which was just released at the World Economic Forum in Amman. The report sets forth the ingredients needed for factor-driven, efficiency-driven, and innovation-driven economies in the Arab world, based on 12 pillars:

Among the Arab countries assessed in the study, Qatar is followed by Saudi Arabia and the UAE. Oman, Bahrain, and Kuwait are ranked a bit lower and North Africa and the Levant are lagging behind the Gulf countries in competitiveness, according to the study. Yet each region boasts different strengths.

North Africa demonstrates relatively strengths in health care, basic education and market size, while the Gulf countries offer a stable macroeconomic environment. The data shows that the Levant has relatively strong education but a weaker infrastructure than other countries (click the image for a larger version).

As can be expected, the major barriers to doing business in the region continue to challenge entrepreneurs. The top three are:

Here is a full list of the region's biggest economic hurdles (click the image for a larger version): 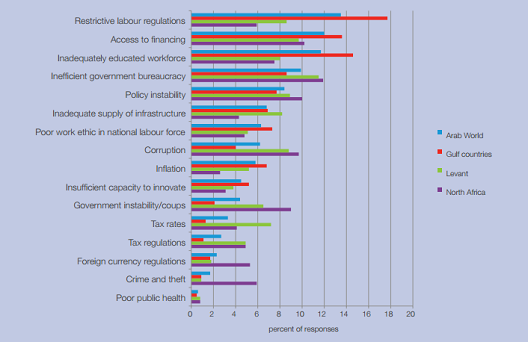 The report also details the needs of the region’s ecosystems and offers a few prescriptions for improving the business climate in each, calling for North African countries to improve their institutional framework and labor-market efficiency, for Levantine economies to build up infrastructure and institutions, and for Gulf countries to focus on education and innovation.