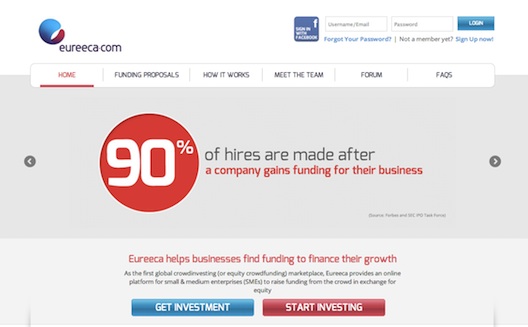 Following the general success of crowdfunding platfoms around the globe, several crowdinvesting platforms are now launching to offer a new model: instead of donating, members of the crowd invest. Instead of t-shirts, companies give equity.

Of the few crowdsourced investment platforms that have launched, most, including the most famous- WeFunder- are restricted to a specific country. Eureeca is changing that.

The Dubai-based platform officially exited its beta phase and launched today as the first platform to offer crowdfunding that's completely global. While the platform is available globally (with the exception of the U.S.), the team is focusing its marketing and communications efforts on the Arab world, starting with the UAE, Jordan and Lebanon. The platform is currently using bank transfer to ease the process of escrow, enabling individuals from all countries to join. Joanne Kubba, Head of Strategy, Partnerships & Outreach at Eureeca, explains that they have "an 18 month roll out strategy that will encompass many markets" even though they haven't yet decided which ones.

A game-changer for the Middle East?

Eureeca co-founder Chris Thomas paints a dismal portrait of the investment options for small businesses. "Banks aren't lending anymore, and venture capitalists are moving to much larger businesses. There’s a funding void that can’t be solved by friends and family.”

The need for more small and medium-sized enterprises (SMEs) is urgent, however, as they account for 50% of the jobs created worldwide, according to the IFC.

His portrait may be extreme; options like, well, the Wamda Capital Fund, are opening up, but Thomas, who, along with co-founder Sam Quawasmi, is a British former investment banker, believes in the power of the crowd. “We’re expanding the Friends and Family idea online,” he says, by helping entrepreneurs tap their personal networks.

Since the beginning of its beta phase in July, "we’ve been overwhelmed with responses in terms of people interested,” he says. Over 400 SMEs have applied, in fields including online retail, nursery, food & beverage, and tech. Now that they're open for investment, Eureeca hopes to have 100 SMEs funded by the end of 2013, and 300 by 2014.

Any business that can display enough information to convince investors can join. Then, says Thomas, “it’s up to the wisdom of the crowd to decide.” Entrepreneurs then have 90 days to reach 100% of the funding target. If not, investors are reimbursed.

When it comes to investors, anyone over the age of 18 with more than US $100 can invest. However, they need to pass some checks. Most investors on the platform thus far are looking to invest in businesses they already know or are in their extended network, says Thomas.

When it comes to investor rights, every situation is a case per case scenario. Eureeca offers templates, but ultimately it's up to entrepreneurs to set their own rules when it comes to voting rights and investment amounts. 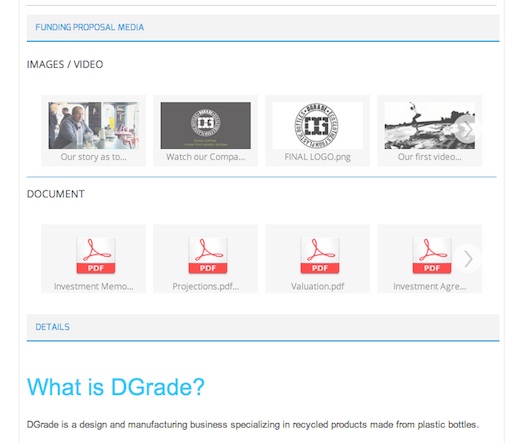 Plenty of skeptics have spoken out about the dangers of the model.

Firstly, many point out the opportunity for scams.  Crowdinvestment may allow projects to escape security laws.

To provide some oversight, Eureeca performs background checks, looking into the founders and startups that apply.

If they deem the company fit for funding, Eureeca then posts their project profile, business plan, executive summary, financial forecast, previous financial accounts, CV, and management bios. “We need to create a safe marketplace for SMEs and investors,” stresses Thomas.

To those who say that investors still might not understand what makes a business model good or bad, Thomas points to the idea that most of the investors on the site know the startup founders offline as well, and rely on that knowledge to some degree to determine the viability of the business model and the risk they're taking on.

Is it good for startups?

Many say that entrepreneurs need not just money but also mentorship. The British founders beg to differ. “Most entrepreneurs just want to raise money and be left alone to get on,” he says. Besides, "There are other ways to find mentorship; it doesn’t have to come alongside investment."

However, to provide a measure of oversight as well as intelligent support, the founders have brought big names onto their board of advisors: Dr. Nasser Saidi, Former Chief Economist of the Dubai International Financial Centre (DIFC), Bruce Armstrong, Former CFO at NYMEX, and Pierre Azzam, Former COO of Impact BBDO & Founder & CEO of Belong Interactive.

What do you think: could this model could help entrepreneurs, and create more jobs? Or will it create more liabiity than investors can handle?