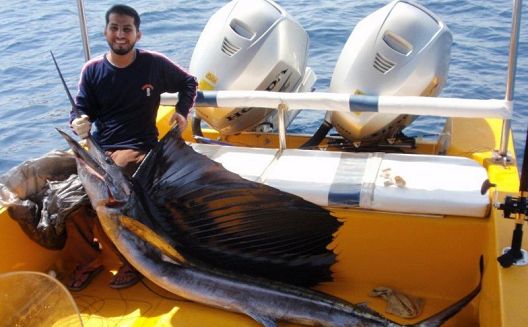 “I used to go fishing with my uncle, but once I graduated it was difficult without my own boat,” says Kuwaiti entrepreneur Abdullah Alshalabi. “After I started working, my office looked out onto the sea, where people were fishing and I daydreamed about exchanging jobs with them.”

Before launching the company, Alshalabi went to Hong Kong to get his MBA and tried hard to find any friends with a boat that could take him fishing. After finishing up the degree, he moved to Spain where he dabbled in a few web startup ideas. “Then I thought, why can’t we make one website that helps us find and book a fishing trip?” he says.

He quickly looked to secure a domain name. “I tried ‘fishme’ but it was taken, so I just added one more ‘fish,'" he explains. He then left Spain and moved back to Kuwait City to start building the company, securing a few charter boats, and, in September that year, recruiting Jose Gil Zafra, a friend with a programming background, to join as a co-founder.

After that, Alshalabi (full disclosure) joined Wamda as a contributor and began looking to build up the Kuwaiti ecosystem by launching StartupQ8, an event series that brings the country's startups together to network and share experiences.

Fishing around the world

To charter a boat, customers go to fishfishme.com and choose one of over twenty locations around the world, including Kuwait, Costa Rica, Oman, Dubai, the U.S., Spain, India, and South Africa. The customers can then read about each charter boat offer, its captain and crew, the best fishing seasons for certain species, assess the boats' equipment, and finally, choose a trip. 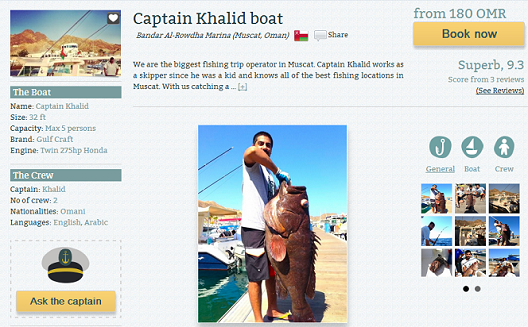 Once a user picks a charter, fishfishme confirms the booking within 24 hours and customers must secure the trip with down payment of between 20-50% of the full cost, depending upon the boat’s arrangement, via credit card or PayPal. After the booking is confirmed, customers receive the captain’s contact information and a detailed reservation for their trip. fishfishme takes a percentage of each deposit, and customers pay the remaining fee when they arrive at the boat.

When they first launched, Alshalabi and his team of four hustled to recruit new charters, but now, he says, people are coming to them to list their boats. When people sign up however, Alshalabi likes to meet them in person to make sure they can deliver, “Last week I was hunting around the UAE, checking the boats personally,” he says.

With 75 charters listed on the site, fishfishme has seen more than 100 bookings in the last two months; around one booking a day.

Typically, they attract two kinds of customers: groups of locals who want to fish but don’t have their own boat, and tourists who want to go fishing with their family and buy more package deals. Although men are often their primary demographic, Alshalabi notes that a lot of their customers are actually women who want to try out fishing for the first time or are reserving a trip for a family member.

Although the startup culture in Kuwait is just beginning, being from Kuwait has had its advantages, says AlShalabi. “Kuwait City is a great place to start and test your product, but it’s a small market. What we are building is a marketplace, and we need to be close to most of the bookings, which are in Dubai and the UAE."

Their most popular destinations are Dubai, Muscat, and Kuwait City, although many customers rave about their trips in Salalah as well, he adds. Kuwait remains their most stable market, but it isn’t as scalable as tourist destinations like Dubai. “We’ve been shocked to have a booking almost every day in Kuwait, which is a really small market, but they love fishing,” says Alshalabi. “But now we’re working on Dubai and Oman.”

He notes that their major challenge is seasonality; fishing relies heavily on good weather and certain fishing seasons. “Sometimes summer is good for foreigners, but locals don’t want to go fishing because it’s too hot,” he says. fishfishme doesn’t have any large competitors, although some sites provide fishing reservations on clunky platforms that only serve a certain country or region. But Alshalabi hopes to take the business global.

Following the advice from his mentor Omar Koudsi of Jeeran and Gil Zafra’s mentor Miguel Angel Ferrero, Alshalabi decided to move to Dubai and join Dubai Internet City’s new incubator in5, where he's set up a new office space, and will benefit from help registering and three months of mentorship. His cofounder and other two team members, who currently have an office in Malaga, Spain, are expected to join him in Dubai soon.

The company has already raised a seed round of $50,000 in October 2012 and hopes to raise a second round once demonstrating their traction.

“Many people who start up in Kuwait are considering moving to Dubai, so I want to share my experience with them to help them to know what to expect when expanding here,” says Alshalabi.