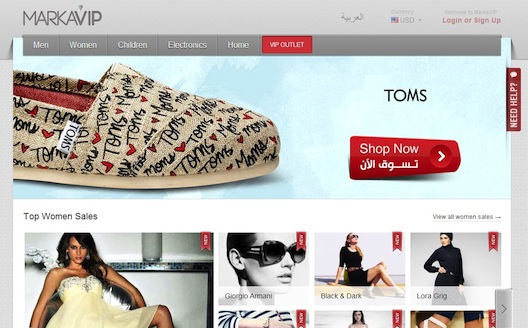 E-commerce may be one of the fastest-growing and most promising startup sectors in the Middle East, but it still poses several challenges. One of the biggest is the popularity of cash-on-delivery as a payment option; a typical e-commerce company can face up to 70% of orders over COD.

To avoid the hassle of COD, most e-commerce sites are trying to boost rates credit card and prepaid card use. The latest to make a move is flash sales site MarkaVIP, which has inked a new deal with PayPal, making it the first e-commerce platform to offer a direct billing agreement via the payment platform.

The site, which sells discounted designer apparel, accessories, electronics and home décor in time-limited deals, will also now offer free shipment to those using PayPal. “Literally one click of the mouse to make a payment, and the added bonus of free shipping, really does bring a new dimension in convenience to shopping,” said COO Sohrab Jahanbani.

The hope is that adding free shipment will persuade customers to get onboard with the world's biggest payment gateway. After all, MarkaVIP's founder, Ahmed Khatib has candidly discussed the difficulties of shipping with COD in markets with high return rates, such as the region's biggest: Saudi Arabia and Egypt.

Since MarkaVIP's launch in 2010, following the success of French flash sales pioneer Vente Privée, U.S.-based Gilt Groupe, and Turkey’s Trendyol, it's risen to become one of the Middle East’s biggest e-commerce companies. Now, all eyes are watching to see if the company- along with other e-commerce giants- can crack the logistics and payment issues that smaller portals also face.

“We see COD as an opportunity, not a threat,” Khatib has said, explaining a year ago that the company minimizes losses by preventing customers from using COD as a payment option if they returned too many packages. "We have a customer ranking algorithm that has been in place for a long time and helps us optimise our COD success rate," Jahanbani confirms.

MarkaVIP has also reduced logistical error by launching last mile delivery systems in Jordan, the UAE, and Lebanon. When asked about rates of return in Saudi Arabia, which have been known to approach 25%, “Our return rates are much lower than that,” says Jahanbani. “They’ve changed dramatically.”

A new focus on PayPal could further tip the balance towards making online ordering a painless experience.

This partnership also confirms the evolution of e-commerce in the region, says Jahanbani. When he and his prior co-founder Dan Stuart first launched daily deals site GoNabit in May 2010, they initially used PayPal as their only payment gateway, but it was a bit early for the market.

“At the time, PayPal hadn't arrived in the region in terms of support, dedicating a team, and working with the banks in the region. They’ve now made it much easier for merchants in the Middle East and North Africa to work with their payment gateway, and I think this has caused some great things since the launch of GoNabit.”

Now, several flash sales sites are angling for a piece of the pie. Sukar, which has merged with sister company Souq, is MarkaVIP's biggest competition, while several newer flash sales sites have cropped up in hopes of nabbing market share, notably Harir, in the fashion sector (where competitors Mistile and Natasawak also operate), and Wysada and Desado, both of which focus on home décor.

Yet, says Jahanbani, MarkaVIP welcomes more players in the market. “We welcome competitors as long they’re enriching the ecosystem. We obviously look at what competitors do, and see if they are doing something exciting on the consumer experience level that we can learn from, but what's most important to us is that we continue to serve our customers in such a way that we continue to build trust.”

PayPal's partnership with MarkaVIP marks a “turning point in the Arab region,” he says. PayPal’s partnership with logistics company Aramex and integration with e-commerce site development company ShopGo are other examples that "demonstrate that PayPal sees the opportunity for growth in the region.”