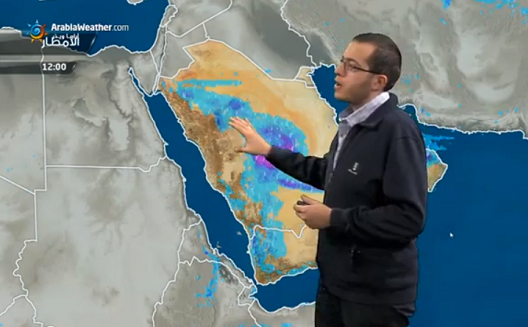 Jordanian entrepreneur Mohamed Al-Shaker is very, very passionate about the weather. “I’ve had an interest in weather since I was 4 years old; I was always thinking about the weather," he says. At just 23 years old, he's managed to turn that passion into one of Jordan's most-viewed websites, and was recently named Ernst & Young Emerging Entrepreneur of the Year in Jordan.

His journey began in 2006, while he was still in high school, and first launched Jordanweather.jo to report local weather. At the time, most other weather stations drew their information from global satellites. Yet thanks to his local, on-the-ground approach, Al-Shaker quickly gained a reputation as Jordan's go-to weather source, gaining invitations to present on many of Jordan’s radio shows and TV stations.

As his site reached over half a million unique visitors a month, he saw the demand for accurate Arabic weather reporting not just for Jordan, but the entire Arab world.

In 2010, he relaunched the site as ArabiaWeather.com, a platform that now boasts almost 1 million unique visitors a month and supplies weather information to airlines and TV stations across the region. In mid-March of this year, his team released a free iOS mobile app that has already seen over 22,000 downloads and has secured an exclusive contract that will make it the standard weather app on Samsung phones in the Middle East.

What really sets his platform apart, he says, is his ability to go very local. With a capable team of 20, ArabiaWeather, Inc. provides an original 5-day hourly forecast and an extended 14-day forecast to nearly 5,000 villages, towns, and cities across the region.

Now, the site is focusing on Saudi Arabia, and hoping to open an office in Riyadh. Al-Shaker is excited by the huge range of weather phenomena across the country. “The weather in Saudi changes from area to area; in Riyadh there are heavy thunderstorms during April and May, in June and July there are heavy dust storms and heat waves, while heavy rain falls on most of the western parts of the country.”

At first, Al-Shaker didn't see weather reporting as a viable career path. “Unfortunately, when I finished high school, there weren’t any majors at universities in Jordan that focused on meteorology, so I decided to study pharmacy,” he says. To keep up with his interests however, he searched outside of Jordan and discovered the UK Met Office College, one of the largest international institutes of meteorology, where he earned two certificates in Advanced Forecasting and Aeronautical Aviation Meteorology, on top of completing his pharmacy degree.

As it turns out, his health background came in handy. ArabiaWeather.com now features a “lifestyle” section, which predicts an average health status related to the weather, for instance, revealing if certain weather is more likely to intensify headaches or asthma. This section also recommends sports and outdoor activities for specific weather, to help users plan out their week.

“We collect our initial data from local weather stations and we have a direct connection with a weather satellite covering the Arab world; we’ve purchased the entire data library it produces,” Al-Shaker explains. His team then models the spread of weather with their own algorithms, to generate presentable forecasts according to topography and climate.

To monetize, the site also sells their weather reporting data to TV stations and airlines across the region, while on their website they generate ad revenue thanks to heavy traffic.

With no major Arabic competitors, Al-Shaker recognizes international services like AccuWeather and The Weather Channel, as well as the standard Weather app included on iOS, as his main competition. But providing original forecasts in Arabic first, without translating other data from English, gives him an edge in the Middle East, he notes. 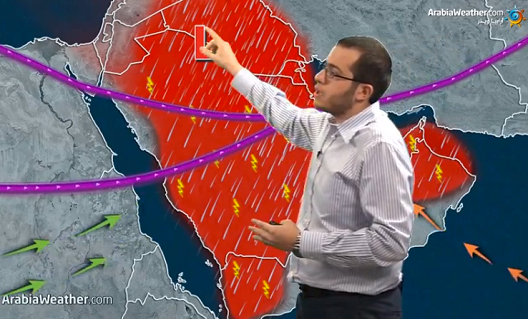 Aside from translating their site into English and French, the ArabiaWeather team also hopes to make weather reporting a more social experience, by allowing users to post pictures and video reports to the website and app to build an online conversation around what’s happening in regional weather. Users will also soon be able to “Be the Weatherman” and upload their own video reports to the site, on top of ArabiaWeather’s in-house online video reporting.

As E&Y Emerging Entrepreneur of the Year in Jordan, Al-Shaker offers some advice for other entrepreneurs in the region: “The major challenge I’ve faced personally is a cultural one. Weather is a unique and strange field, so people around me wonder what kind of work you can do in terms of weather. But if you have an idea and you believe in it, just go for it, no matter what others say.”