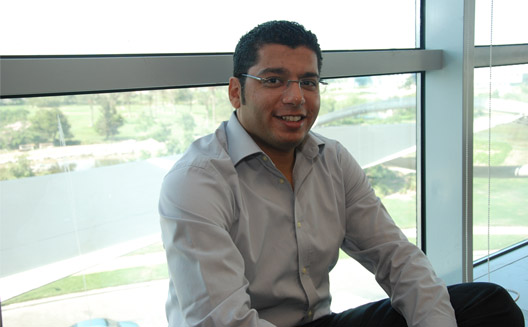 Although Al-Ayouti graduated from Cairo University with a degree in Computer Engineering in year 2000, he never practiced engineering, instead delving straight into building. He may have started with LEGOs as a kid, then graduating to software, websites, his own startup, and now, business units within Vodafone Egypt. Now, based on the deep understanding of entrepreneurship in Egypt that he has accumulated over the past 15 years, Al-Ayouti is looking forward to supporting "an ecosystem to help build startups."

When he joined Vodafone Egypt in 2008, Mohammed's first project was the creation, and launch, of the “Mobile Internet” function- the first to launch in Egypt. After managing its subsequent development as a mass-market product, he then handled a number of related projects including smartphones, data plans, and mobile apps. One followed the next, he says: "Every role I have undertaken at Vodafone is an evolution of a previous role."

Al-Ayouti's current role, as Senior Manager of Vodafone xone, is no different. "My current role is helping to provide a stream of apps and content products, by working directly with the source of innovation: the tech entrepreneurs of Egypt," he elaborates.

Vodafone xone encompasses a venture capital unit, incubation services, beta labs, and an ecosystem support unit. It was first launched during the second half of the year 2012, and through out the past few months, it gradualy launched its various components. Al-Ayouti remarks, "Vodafone xone is, in itself, a startup".

Al-Ayouti explains what Vodafone xone can offer entrepreneurs, "In addition to funding and mentorship, we provide hands-on support with product design, commercial, and technology, as well as support services such as finance, legal, HR, and more."

The ventures component of Vodafone xone has made 5 investments so far, only three of which have been announced. The fund has a healthy pipeline for the near future, says Al-Ayouti. His personal ambition is to see Vodafone put its might behind marketing their most promising startups in the portfolio, and to eventually leverage Vodafone xone offices in Egypt and Silicon Valley to successfully relocate an Egyptian startup across the ocean.

The entrepreneurship ecosystem in Egypt

When asked what entrepreneurs in Egypt need to focus on, Al-Ayouti parses their short, medium, and long-term views: in the short term, he believes startups need the standard elements: access to capital, access to mentors, and access to marketing. In the medium term, he thinks the ecosystem needs more institutional players, and needs to see at least one major success story. On the long term, he hopes to see entrepreneurship become a societally-accepted concept, and embraced as Egypt’s only hope to long-term economic prosperity.

Al-Ayouti concludes with pointing out the one domain he thinks deserves the most attention from entrepreneurs in Egypt, "If I have to pick one thing, it would be e-commerce. The world has moved on from traditional commerce to electronic commerce. Egypt is far behind. It’s like saying that the world has moved away from barter trading to money-based trading, and we’re still stuck with barter."