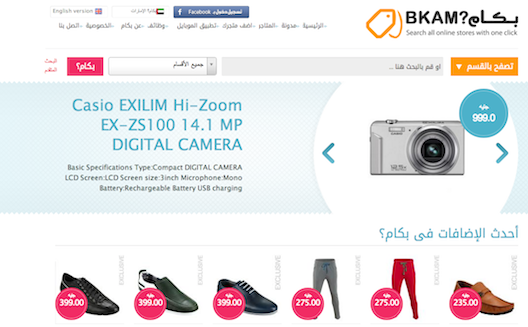 Egyptian price comparison site Bkam.com has announced its launch in the UAE, following recent investment from Jabbar Internet Group for an undisclosed amount.

Bkam is a price comparison website that scrapes data from various e-commerce sites to reveal the best deals on goods throughout the Egyptian and now UAE markets. Since its launch in October, the site has gained a decent amount of traction, now seeing around 6,000 visits daily and 50,000 downloads of its iOS application.

With the investment, which will see Jabbar taking a minority stake, Bkam plans to launch a marketing campaign, expand in the UAE, and enter the Saudi market. it will also opening up its platform to enable offline stores to list their goods by uploading an Excel spreadsheet. “Advertising in newspapers, or launching a website, is expensive," says founder Mahmoud Abdel-Fattah. "We offer offline retailers a solution that’s halfway between creating their own e-commerce store, and having sellers contact them over the phone.”

For Jabbar, Bkam is the first minority stake investment it’s made in awhile, if ever. Now that Souq.com has split from Jabbar Group and is now managed by Souq Group, and Cobone is wholly owned by Tiger Global, Jabbar’s portfolio includes ikoo, Tahadi, Nibras, and Araby.com. In a conversation in March, CEO Samih Toukan said that Jabbar was looking to ramp back up its activities, investing in different areas of online and mobile businesses beyond e-commerce.

In the press release, Toukan states, “We approached Bkam.com because we saw in their vision the promise of something very successful in the region,” said Samih Toukan, Chairman, Jabbar Internet Group. “Their technology is very unique and the team behind it is committed to growing and developing the concept.” (Abdel-Fattah also notes that the Jabbar team approached him about investment after reading our article on Bkam on Wamda).

Will Souq benefit from Bkam's technology?

As a site designed to boost e-commerce, Bkam could also help boost the visibility of Souq’s products. (While Souq is not managed by Jabbar, as mentioned, it is overseen by the directors of Jabbar).

Yet Abdel-Fattah refutes the idea that Bkam will now have a special relationship with Souq; it will not feature items from Souq more frequently than others, he says. “We are neutral. Souq.com will be like any other website." Sites won’t be allowed to pay to promote the visibility of their items, either: “If only expensive stores can afford to promote their items, the user loses out.”

Abdel-Fattah also insists that Souq will also not have unique access to its database of aggregated price information and consumer behavior intelligence. “If we release data, we’ll release it to the public,” he says.

Releasing consumer behavior data to the various e-commerce sites aggregated on Bkam is also a potential part of the company’s revenue model; it’s important that e-commerce companies don’t think that their data is being freely funneled to a potential competitor.

A final aspect that could benefit Souq is the technology behind Bkam, which Abdel Fattah says differentiates it from other price comparison sites.

It’s not just a knack for mobile. From the beginning, Abdel-Fattah worked with well-known Egyptian software development company eSpace to build an algorithm that could automatically group items with variations on the same name, such as “Samsung Galaxy 4,” or “Galaxy IV.” (eSpace also worked to help build popular Arabic news aggregator Akhbarak.net, whose founder, Osman Osman, invested seed capital in Bkam last September.)

Grouping doesn’t appear to be a massive issue on Souq, but accurate categorizing often takes human effort, and any algorithm that could better automate that process would help an e-commerce marketplace.

Whether or not Bkam ends up sharing its resources with Souq, the investment makes sense for Jabbar, as Abdel-Fattah and his team are primarily focused on developing intelligent technology that can boost e-commerce buying on the whole.

Aside from marketing and regional expansion, Abdel-Fattah says Bkam may also expand into aggregating flash sales.

Initially, listing flash sales didn’t make sense in Egypt, he explains; some sites didn’t ship there, and those that did would list prices in the deal offers that wouldn’t reflect the cost of import duties, which would double the price. When your business is price comparison, you don’t want to mislead customers.

Partnerships with telecoms are also in the works, to help the site boost their mobile presence. “Our mobile application is a huge hit with Egyptian consumers,” Abdel-Fattah said in the press release. “We anticipate similar growth in the UAE and then Saudi Arabia in a few months.”